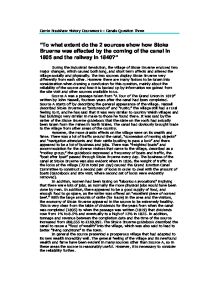 Carrie Bradshaw History Coursework - Canals Question Three "To what extent do the 2 sources show how Stoke Bruerne was affected by the coming of the canal in 1805 and the railway in 1840?" During the Industrial Revolution, the village of Stoke Bruerne endured two major changes, which caused both long, and short term affects and altered the village socially and physically. The two sources display Stoke Bruerne very differently from each other. However there are many factors to be taken into consideration when drawing a conclusion for this question, mainly about the reliability of the source and how it is backed up by information we gained from the site visit and other sources available to us. Source A was a passage taken from "A Tour of The Grand Union in 1819" written by John Hassell, fourteen years after the canal had been completed. Source A starts off by describing the general appearance of the village. Hassell described Stoke Bruerne as "picturesque" and "rustic," the village still had a rural feeling to it, and he has said that it was very similar to country Welsh villages and had buildings very similar in make to those he found there. It was said by the writer of the Stoke Bruerne guidebook that the slate on the roofs had actually been taken from the mines in North Wales. ...read more.

On the site visit the guide had spoken about "social clashes," with new people coming into the village it was often difficult for the inhabitants to adapt. Many were said to have found it difficult to adjust to the influx of skilled people in the village and were unable to compete job-wise. Others simply did not like the diversity of the boat people who passed through generally. There is no mention of any accidents or the dangers that the locks brought about, whereas some excerpts from the logbook of the village school had repeatedly mentioned problems of children coming very close to falling into the lock. In addition, even though the village was obvious flourishing financially, there is no indication as to who the money is going to, we do not know if the wealth was spread about or if was simply made by people quick enough to start up small businesses like the inn for example. As the source shows a very one sided, bias argument it does not particularly it is not superior on its own in displaying the full consequences of the canal other than the good points. If there were a negative source written at the same period that could be used in conjunction with the source, then it would be possible to achieve a more rounded answer. ...read more.

Further supporting the problems, the Grand Junction Canal Committee showed an eventual lack of funds and apathy in meetings when continual faults in the tunnel had been reported and eventually no action was taken to fix the cracks and the tunnel was simply left to fall into repair. Overall the source displays a reasonably poor, quiet village unable to cater for visitors. This overall tone is frequent in many other sources and most points are backed up wholly. However, we do not know why the source was written and the links that Hollingshead had with the village. In addition, the source displays a very one-sided answer, like source A, which would mean again that it is not a valuable source on its own. In general, the two sources give an image of the village after the construction of the canal and later the railway. However, any information given about the village other than the atmosphere are simple implications. There are no definite statements, such as the village was wealthy, I was simply able to deduce facts from the sources which I could then further back up with other sources. Without other sources on the village, both the sources would be fairly useless. However with other information the sources are quite useful and appear to be reliable, as many of the points made are backed up by other sources. ...read more.