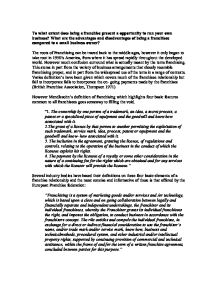 To what extent does being a franchise present a opportunity to run your own business? What are the advantages and disadvantages of being a franchisee compared to a small business owner? The roots of Franchising can be traced back to the middle ages, however it only began to take root in 1950's America, from where it has spread rapidly throughout the developed world. However much confusion surround what is actually meant by the term franchising. This stems in part from the variety of business arrangements that closely resemble franchising proper, and in part from the widespread use of the term in a range of contexts. Varies definition's have been given which covers much of the franchisee relationship but fail to incorporate fails to incorporate the on- going payments made by the franchisee (British Franchise Association, Thompson 1971) However Mendlesohn's definition of franchising which highlights four basic features common to all franchisees goes someway to filling the void. "1. The ownership by one person of a trademark, an idea, a secret process, a patent or a specialized piece of equipment and the goodwill and know how associated with it. 2.The grant of a licence by that person to another permitting the exploitation of such trademark, service mark, idea, process, patent or equipment and the goodwill and know- how associated with it. 3. The inclusion in the agreement, granting the licence, of regulations and controls, relating to the operation of the business in the conduct of which the licensee exploits his rights. ...read more.

At the formal level franchisees occupy an ambiguous position of neither being fully in control of their business or fully controlled. The franchise contract sets the parameters of the franchisee-franchisor relationship, it is referred to if things go wrong, and sed tp brings wayward franchises back into line and protects the franchisors goodwill It is the primary franchise document placing legally binding obligations and duties on both parties. There is an imbalance of power within such documents and imposes far more obligations of franchisee than franchiser. Although franchising is often toted as independence there is a number of contractual clauses whichever designed to keep franchisees operationally bound in the way they do business. The extent of the franchisees operational independence will rely heavily on provision in the operational manual. The operations manual lays down a set of minimum standards and tells the franchisees how to oared the business to the franchiser's satisfaction. The more detailed the manual (sometimes 40 pages) the less room there is for the franchisee to put his own perosnlaity on the business. Even though they operate without close and direct supervision, franchisees are required to operate within procedure laid down by the franchisor and this is often subject to unilateral change. Franchisees are also sometimes committed to adhere to franchisor set performance targets, furthermore while they appropriate the profits of the business they do so after they have made turnover related profits to the franchisor. Additionally franchisees have no ownership rights in the intangible business assets, they simply borrow the idea and/or format. ...read more.

3. It is often difficult for the prospective franchisee to assess the quality of the franchisor, and it is possible that the franchisee agreement may not meet the Franchisee's expectations of sales and/or profits. 4. The franchisee may become to dependent on the franchisor and not produce the personal effort and drive needed to take full advantage of the proven business format of the franchisor. 5. The policies adopted by the franchisor may conflict with the franchisee's profitability. I.E. the franchisor may want to build a higher turnover (on which a fee is paid) while the franchisee may want increased profitability which does not necessarily stem from turnover. 6. Many complaints centre around the decisions made in far-off offices with little or no understanding of the conditions at the local outlets. 7. The trade name of the franchisor may become less reputable - through either a combination of mismanagement or the shortcomings of other franchisees , this may produce a negative public reaction to the franchisee as it is seen as representive of the whole organisation. The issue is complicated because the language of independence and entrepreneurship, is often touted by franchisors to tempt people into buying a franchise, yet the operational and formal extent of independence given to a franchisee will often be extremely curtailed and in reality very few departures from the standard franchise contract are tolerated by franchisors. Many franchisees are attracted about the prospect of going into business, but lack the necessary idea or know how, as such franchising offers them a bridge into business. However it carries a certain trade off: the desire to be your own boss' against operating under someone else's trademark according to a set of con ...read more.