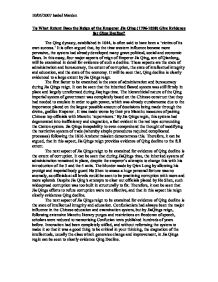 To What Extent Does the Reign of the Emperor Jia Qing (1796-1820) Give Evidence for Qing Decline?

To What Extent Does the Reign of the Emperor Jia Qing (1796-1820) Give Evidence for Qing Decline? The Qing dynasty, established in 1644, is often said to have been a 'victim of its own success.' It is often argued that, by the time western influence became more pervasive, the system had already developed many grave political, social and economic flaws. In this essay, four major aspects of reign of Emperor Jia Qing, son of Qianlong, will be examined in detail for evidence of such a decline. These aspects are the state of administration and bureaucracy, the extent of corruption, the state of intellectual integrity and education, and the state of the economy. It will be seen that, Qing decline is clearly evidenced to a large extent by Jia Qings reign. The first factor to be examined is the state of administration and bureaucracy during Jia Qings reign. ...read more.

Therefore, it can be argued, that in this aspect, Jia Qings reign provides evidence of Qing decline to the full extent. The next aspect of Jia Qings reign to be examined for evidence of Qing decline is the extent of corruption. It can be seen that during JiaQings time, the inherited system of administration remained in place, despite the emperor's attempts to change this with his introduction of the 3 and the 5 antis. The blunder made by Qien Long by allowing his prot�g� and imperial body guard Ho Shen to amass a huge personal fortune was no anomaly, as officials at all levels could be seen to be practicing corruption with more and more aplomb. Despite Jia Qing's attempts to clear out officials placed by Ho Shen, such widespread corruption was too built in structurally to fix. ...read more.

Basically, during Jia Qings reign, problems were rife. The fixed land poll tax put into place by Qian Long, which accounted for 5 per cent of imperial revenue, had their figures totally falsified by corrupt officials who increased their expected 'customary charge' for transaction to about 50 per cent of the tax itself! Local officials were often not above raising exchange rates for their own benefits, and ground level bastardization of the revenue system was commonplace and everyday. Therefore, it is evident that in this aspect, Jia Qings reign can clearly be seen to evidence Qing decline. In conclusion, in the case of the state of the economy, the state of the education and intellectual system, the state of administration and bureaucracy, and the extent of corruption, the regin of JiaQing clearly gives evidence for Qing decline. The lack of reform and inherited problems resulting from dynastic stagnation were definite factors in his rule. ?? ?? ?? ?? 10/05/2007 Isabel Marden ...read more.