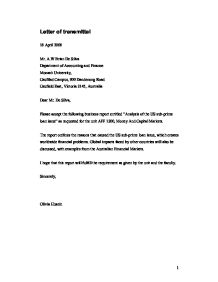 It aggravated the problem not only by pushing rates lower, but also by fueling the market volatility that caused investor losses. There is a type of hedge fund strategy known as "credit arbitrage" which involves purchasing sub-prime bonds on credit and hedging these positions with credit default swaps, it increases demand for Collateral debt obligation (CDO). Because hedge funds use a significant amount of leverage, losses were amplified and many hedge funds shut down operations as they ran out of money in the face of margin calls (investopedia, 2008). 3.2 Global impact The shock waves emanating from the sub-prime mortgage earthquake are now spreading around the financial world. The collateral damage is being unveiled so quickly that it is difficult keeping up with all the collapsed hedge funds, injured banks, and defaulting mortgage brokers (Numerian, 2007). 3.2.1 Credit crunch and the effect in the banking sector The credit crunch was sparked as a result of the housing slump, rising interest rates, and record defaults in the sub-prime sector of the United States, and over recent weeks the global repercussions of this crisis have become increasingly evident. The credit crunch affected the Northern Rock bank in Britain most. When the fact of the credit crunch was discovered, many of the bank's 1.5 million savers queued at all hours of the day and night in order to withdraw their savings amidst fears that the bank might be on the verge of collapse (Kenny, 2007). The run on the Northern Rock's continued for days, despite the Bank of England's intervention with a guarantee of deposits (Long, 2007). In the space of a few days, over two billion pounds was withdrawn from Northern Rock by worried savers. Not only did this damage the company financially but it also did not favours in terms of its reputation, and many experts predicted that even if the bank survived the financial losses it would not survive the damage to its reputation. ...read more.