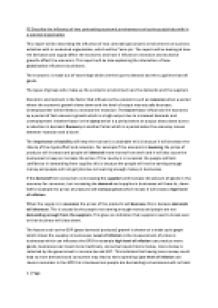 ﻿P5 Describe the influence of two contrasting economic environment on business activities with in a selected organisation This report will be describing the influence of two contrasting economic environment on business activities with in a selected organisation, which will be Tesco plc. The report will be looking at how the demands and supply affect the economic and how it influences recession and excessive growths affect the economic. This report will be also explaining the interaction of how globalisation influences businesses. The economic is made out of two things which are the buyers demand and the suppliers that sell goods. The types of groups who make up the economic environment are the demands and the suppliers. Economic environment is the factor that influences the economic such as recession when a period where the economic growth slows down and the level of output may actually decrease. Unemployment will be likely to increase the recession. The boom factor influences the economic by a period of fast economic growth which is a high output due to increased demands and unemployment. Another factor is the slump which is a period when an output slows down due to a reduction in demand. Recovery is another factor which is a period when the economy moves between recession and a boom. The importance of stability will keep the economic sustainable this is because it will decrease the chance of the ripple effect and recession. For example if the economic is booming the prices of products will increase and people will demand more money from work and it will also cause the businesses to keep on increase the prices. If the county is in recession the people will lack confidence in demanding from supplies this is because the people will not be earning enough money and people will not get jobs due not earning enough money in businesses. If the demand from consumers is increasing the suppliers will increase the amount of goods in the economy for consumer, but increasing the demand ...read more.

weren’t concentrating on the like for like sales in 2011 and 2012 to help increase sales. But in the in the articles it says that the reason of not gaining sales is because “it’s sells a higher proportion of non-foods than other grocers and also because of years of under investment.” Which they did in the recession but not when they were recovering from recession. Tesco PLC revenue was a lot less and growing slow in the recession for example on the article, Mr. Pritchard said “cash gross profit and the margin are less. This gives an indication that Tesco PLC’s revenue will not be as much as it use too and it will grow a lot slower than before. But when Tesco was in recovery in the article Tesco PLC revenue in Britain has struggled more than many rivals. This suggests that Tesco PLC weren’t able to meet their revenue. This suggest that in recession Tesco were supposed have a slow revenue growth but on the other hand when Tesco was in recovery Tesco PLC was supposed to have an increasing speed of growth revenue but haven’t. When Tesco PLC invested more than £500 million in the big price drop, which is a result of showing that Tesco were listening carefully to the views over 200,000 customers and increased sales. This gives an indication when Tesco PLC was in recession Tesco PLC invested in the big price drop scheme to get a visual of what consumer demand. But when Tesco was recovering from recession Tesco PLC didn’t invest much than in the recession for example the article says “of years of underinvestment” which suggest that they weren’t investing as much in recovery. In conclusion, Tesco PLC did a lot better in the recession for example using the like-for-like sales strategy to help gain sales, listening to consumers suggestions to get a visual of what consumers want. But in the recession but when Tesco was in recovery sales weren’t going up and they were underinvesting which comes to show that revenue will go down. | Page ...read more.