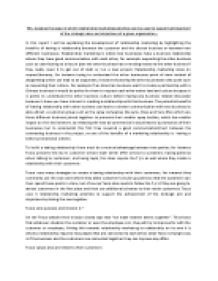 Unit 11 M1 Analyse the ways in which relationship marketing activities can be used to support achievement of the strategic aims and objectives of a given organisation.

Value of money- from a dominant view here would write that Tesco does have value of money but in fact they do and don?t, because in the early times before 2008 Tesco used to be a popular store because it had cheap products and even cheaper store branded product but in recent years stores like Aldi and Lidl having becoming a lot more popular became they are selling even cheaper products, before Tesco used to be compared only to Morrison and Asda which were the top supermarkets but businesses like Aldi entering the market has created competition for the business became know on news articles Tesco are being compared to these stores and are being criticized because their prices have not changed. Varied place- in order to meet their aim to grow in the uk, and to become the largest supermarket globally, they must attract multiple audience by entering different markets, for instance they have currently entered every market possible form groceries, to the phone market and even selling insurance, they have stores across the Uk varying edible snacks to stores like Dobbies selling gardening facilities, they even have their own website offering home delivery and also having an app which can be accessed on the go. This shows that Tesco wishes to expand because they have tried to attract the attention of lots of different audiences; they even pushed the limit when they started to build retailers across the world which went successfully. Customer relationship management -Attractive promotions such as loyalty card of Everybody is aware of the Tesco club card system where customers are even are aware of this service even before they start to shop at Tesco, this is one of the main method Tesco has to retain customers, it is where with every sale made the customer is rewarded with point which can be stocked up where they can then spend in store or even on additional awards from other businesses like the cinema, but in order to know what ...read more.

store that sells only products but if they meet their customer service mission it will be seen as the store that sell products alongside the excellent customer service that they have to offer. To summarize in order for Tesco to meets its organization mission they firstly need to meet customer service mission, this is because many of the organization mission include having meeting customer need such as ?to grow the UK core? in order to build a better Tesco they need their customers on their side such as knowing what customers need and what they look for in the store so they can be seen as the best supermarket in the UK, but in order to ache this aim they need to fulfill a customer service mission like ?using our scales for good? where they use the power they have for good like listening to their customer and see what they want to see, such as more variety of products in the store or a charitable organization that Tesco donates to so customers can see that meets the need of not only those in the store but those who are outside the store such as the cause of the charity which is to support the homeless people in the local community. Building long term relationships of mutual advantage Tesco seeks to grow in core, and achieve growth in new geographical market and be strong in new product/service market development, this all rely on sales, sales should really be from partners because they would buy entire packages that Tesco continuality offer, instead form customers that buy from you because of the one offer they like. conclusion, relationship marketing is very important to keep a business running successfully; where the business uses specific techniques to get new customers and different techniques to retain customers. These methods ensure that the business is not making a loss from advertising but instead it is benefiting sales from new/existing customers by creating a good reputation and overall total quality approach. ...read more.