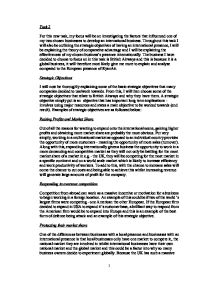 Task 2 For this new task, my focus will be on investigating the factors that influenced one of my two chosen businesses to develop an international business. Throughout this task I will also be outlining the strategic objectives of having an international presence, I will be explaining the theory of comparative advantage and I will be explaining the effectiveness of my chosen business's presence internationally. The business I have decided to choose to focus on in this task is British Airways and this is because it is a global business, it will therefore most likely give me more to explain and analyse compared to the European presence of RyanAir. Strategic Objectives I will now be thoroughly explaining some of the basic strategic objectives that many companies decided to use/work towards. From this, I will then choose some of the strategic objectives that relate to British Airways and why they have them. A strategic objective simply put is an objective that has important long term implications - involves using major resources and states a main objective to be worked towards (end result). Examples of strategic objectives are as followed below: Raising Profits and Market Share Out of all the reasons for wanting to expand onto the international scene, gaining higher profits and obtaining more market share are probably the most obvious. Put very simply, working in a multinational market as opposed to an individual country provides the opportunity of more customers - meaning the opportunity of more sales (turnover). Along with this, expanding internationally gives a business the opportunity to work in a more demanding and competitive market as they will not only be battling for the most market share of a market in e.g. - the UK, they will be competing for the most market in a specific continent and on a world scale market which is likely to increase efficiency and work productivity of workers. ...read more.

Taking all of this into consideration, allowing British Airways to work in their nations must have been a good decision because not only does it give people a wider selection to choose from, it also provides firms working in the same field a good reason to improve their quality and efficiency and not take consumers for granted which in the end, must be beneficial to the nation. The only negative I would point out that comes from allowing a business such as British Airways into a nation is the problem of pollution. Pollution is quickly becoming a world spread problem and it arises from things such as cars and planes. Allowing British Airways to operate in turn means more planes entering the country which would definitely add to the problem, fuelling criticism from environmentalists as to why they were ever allowed in in the first place. Employment and Development of New skills and Knowledge No matter how established the nation may be, there is not one country in the world where employment is 100% and thee is where the allowance of foreign businesses relate. The more companies that operate in a country, the more jobs available there will be and that is without a doubt one of the main attractions for host countries when allowing businesses from other countries to operate there. As I mentioned earlier, ultimately it is a decision the government must take to decide whether the introduction of a foreign business would benefit the country's economical state and whether it be the Prime Minister of the UK or President of USA etc. one of the main priorities of country leaders is to tackle unemployment issues and that is why it is so tempting for governments to allow businesses from outside the country to invest in operating and advertising themselves there as it is a brilliant and effective way of opening up new jobs and this would apply to British Airways. ...read more.