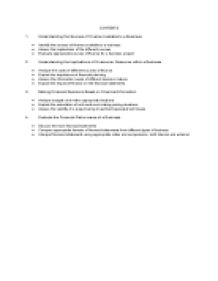 ﻿CONTENTS 1. Understanding the Sources of Finance Available to a Business * Identify the sources of finance available to a business. * Assess the implications of the different sources * Evaluate appropriate sources of finance for a business project 1. Understanding the Implications of Finance as Resource within a Business * Analyse the costs of different sources of finance * Explain the importance of financial planning * Assess the information needs of different decision makers * Explain the impact of finance on the financial statements 1. Making Financial Decisions Based on Financial Information * Analyse budgets and make appropriate decisions * Explain the calculation of unit costs and making pricing decisions * Assess the viability of a project using investment appraisal techniques 1. Evaluate the Financial Performance of a Business * Discuss the main financial statements * Compare appropriate formats of financial statements from different types of business * Interpret financial statements using appropriate ratios and comparisons, both internal and external. ________________ Internal Sources: Working Capital ? Money available for day-to-day running of the business. Retained profit, reducing inventory and tighter credit control all fall under this heading Retained profit - the profit kept in the company rather than paid out to shareholders as a dividend. (http://beta.tutor2u.net/business/blog/qa-what-are-retained-profits - visited 11 March 2015) Advantages: * Cheap form of finance * No interest and readily available * No risk of ownership dilution due to shares issue. Disadvantages: * Shareholders may require a dividend be paid * If no profit, then no expansion Cost: * To the shareholders who will not get the dividend payout they expected. * Pressure cost for the Manager/owners to ensure that the money they reinvest in the company pays a higher dividend in the long term. Tighter Credit Control ? Chasing debtors and offering discounts for early payment. Paying suppliers at the end of credit period and not early. Advantages: * No Interest rates * Better cash flow * No repayments Disadvantages/costs: * Late payment of supplier could mean loss of reputation/no more credit. ...read more.

The influx of funds makes the management try to limit the excessive liquidity in the company as this can lead to financial imbalances such as the prices of the long term assets. Moreover, if the funds are not properly managed, they can increase the current and long term liabilities of the company. As such, organizations must be transparent about this by providing more information regarding the performance of the business so as to expose the type and extent of risks the company is facing with respect to the influx of cash. More information about the cash dealings increases transparency as well as certainty to the investors. When financial statements are prepared from fully updated reports, the company minimises the risks that are unforeseen since interpretation of the data is made easier. It is prudent to note that companies that are always transparent are very eager to publicise their capital and earnings as it is a reflection of their performance. This enhances good financial conduct which prevents mismanagement of funds or unforeseen volatility (Brigham & Ehrhardt, 2005). (word count: 2914) 3. Making Financial Decisions Based on Financial Information Budget analysis is important to ensure that the budget is working and the business is on track. The above budget can be analysed as follows: There was a loan paid to the business in January which gave a temporary cash boost to the company. However there was then a number of large outgoings. These were for equipment and purchases. The fixed costs of wages and rent also had to be paid resulting in a loss at the end of the month. The company should?ve budgeted better for all expenses and even with a loan payment being received they were still overspending. In February they started with a negative balance and the cash sales dropped although credit sales increased. This would be good except for the fact that the credit sales will not be in the cash flow yet and so the company needs to bear that in mind. ...read more.