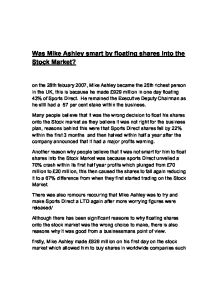 Was Mike Ashley smart by floating shares into the Stock Market?

Was Mike Ashley smart by floating shares into the Stock Market? on the 28th febuary 2007, Mike Ashley became the 25th richest person in the UK, this is because he made �929 million in one day floating 43% of Sports Direct. He remained the Executive Deputy Chairman as he still had a 57 per cent stake within the business. Many people believe that it was the wrong decision to float his shares onto the Stock market as they believe it was not right for the business plan, reasons behind this were that Sports Direct shares fell by 22% within the first 3 months and then halved within half a year after the company announced that it had a major profits warning. ...read more.

There was also romours reccuring that Mike Ashley was to try and make Sports Direct a LTD again after more worrying figures were released/ Although there has been significant reasons to why floating shares onto the stock market was the wrong choice to make, there is also reasons why it was good from a businessmans point of view. firstly, Mike Ashley made �929 million on his first day on the stock market which allowed him to buy shares in worldwide companies such as Adidas, Lonsdale, Blacks and Newcastle United football club, this would mean that he would be making more money each year. ...read more.

Mike ashley then went on to sell off his current shares in Adidas which made him a �29 million profit in just 8 weeks, this proves that he is a smart businessman and knows when to trade shares. 4 months later shares in adidas fell. The last reason why i beleive that it was a smart decision floating the shares onto the Stock Market when he did is because we are now living in a recession which means share prices will only be shrinking and every day and people are going to be less inclined to buy into a business. Mike Ashley is now the 54th richest person in the UK worth �1398 million, Down from 25th place last year when he was worth �1900 million ...read more.