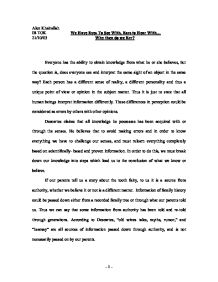 We Have Eyes To See With,Ears to Hear With.

Alex Khairallah IB TOK We Have Eyes To See With, Ears to Hear With... 21/10/03 Why then do we Err? Everyone has the ability to obtain knowledge from what he or she believes, but the question is, does everyone see and interpret the same sight of an object in the same way? Each person has a different sense of reality, a different personality and thus a unique point of view or opinion in the subject matter. Thus it is just to state that all human beings interpret information differently. These differences in perception could be considered as errors by others with other opinions. Descartes claims that all knowledge he possesses has been acquired with or through the senses. He believes that to avoid making errors and in order to know everything we have to challenge our senses, and must relearn everything completely based on scientifically- based and proven information. In order to do this, we must break down our knowledge into steps which lead us to the conclusion of what we know or believe. If our parents tell us a story about the tooth fairy, to us it is a source from authority, whether we believe it or not is a different matter. ...read more.

This aims on improving accuracy of information presented to us from authority, or else we will begin to doubt knowledge from this source. Through memory, however, you base knowledge on previous experiences. For example, you don't listen to other soccer player's accounts of how painful an injury was, because you have felt it yourself, and so are more certain of what you know. Superstition, assumption, opinion, belief and conjecture are the ways of knowing Descartes says are from an interpretation of arthritically passed down information or of personal experience. When we study an event or look at something from the outside, our brain looks at the data in a certain way, and then the brain analyses it. The problem is that we tend to believe that through the sense of sight we have access to the outside world. We think others looking at the same object see and think of the same thing, but we don't think in the sense that the other's brain interprets what is being looked at at a different angle. Therefore we can conclude that different point of views can be seen with different people when looking at the same object because different interpretations are made. ...read more.

Any of these views can be considered an error by a person who holds a different view. In the Bible, Christianity states (Jesus mentioned), if someone hits you on one cheek, turn to show him the other. This could be interpreted as give the person a second chance to be forgiven. On the other hand, in he Islamic religion, in the Koran says, "eye for eye, tooth for tooth." This is said to incite people to defend themselves and take revenge. This example shows how different religious backgrounds affect opinion on how to deal with such a situation- how to interpret what you see and what you hear. I conclude that different people have different matters of perception, and have different opinions based on their cultural background. They may also have a mind which analyzes information in a different perspective than the mind of others. Humans can also obtain information from a variety of sources. Whether the information from authority or experience is accurate, is a subjective opinion, which others may view as an error in belief. Thus, to avoid error, one must not only rely on his or her senses and perception, but that of others as well. - 1 - ...read more.