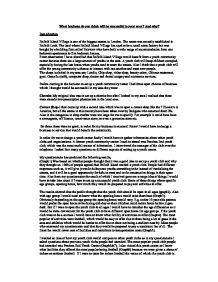 What business do you think will be successful in your area? And why?

What business do you think will be successful in your area? And why? Introduction Enfield Island Village is one of the biggest estates in London. The estate was recently established in Enfield Lock. The land where Enfield Island Village lies used to be a small arms factory but was bought by a building firm called Fairview who have built a wide range of accommodation from one bedroom apartments to five bedroom houses. From observation I have identified that Enfield Island Village would benefit form a youth community center because there are a large amount of youths in the area. A youth club will keep children occupied, especially during the late hours when youths tend to roam the streets. Also I think that a youth club will offer the young community a chance to interact with one another and meet new people. The shops included in my area are; Londis, Chip shop, video shop, beauty salon, Chinese restaurant, gym, Garnells (caf�), computer shop, doctor and dental surgery and numerous services. ...read more.

100% of people agreed that Enfield Island needed a youth club. People had different responses such as, it will give juvenile delinquent youths something to do instead of vandalising the streets, and it will be a good opportunity for kids to meet and to do constructive things in their spare time. Also from my questionnaire the result of which I received gave me a rouge idea of things I would have to take into count if I were to set up a successful youth club. Some of these things where specific age groups, opening hours, how much they would be prepared to pay and activities to offer. The results showed that the public thought that the youth club should be open to all ages (graph2). Also with age group I would need to know what the opening hours would suite them best (Graph3). Obviously depending on the age group the opening hours would vary. ...read more.

The third part of my questionnaire was to find out if there were any extra things that the club should offer, which was should food be provided? Most people said yes, but personally I would disagree because in the local area we already have shops that provide food items e.g. Londis. And the last question was should the youth club offer any trips during school terms or holidays? The suggestions were as follows, theme parks, educational trips and cinema visits. Another useful source of information was the manager of the Ponders End Youth club of whom I conducted an interview with. He explained the financial aspects of setting up a youth club, the most important issue being funding. Local youth clubs like the one I am setting up are usually funded by the local council in my case it would be Enfield Council. This would involve receiving grants yearly. The council pay youth club workers wages. If extra funds were required then I would look for companies to sponsor the youth club. ...read more.