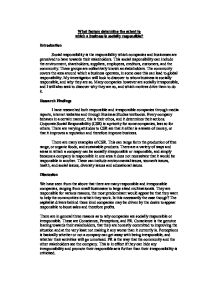 What factors determine the extent to which a business is socially responsible?

What factors determine the extent to which a business is socially responsible? Introduction Social responsibility is the responsibility which companies and businesses are perceived to have towards their stakeholders. This social responsibility can include the environment, shareholders, suppliers, employees, creditors, customers, and the community. These groups are collectively known as stakeholders. The community covers the area around which a business operates, in some case this can lead to global responsibility. My investigation will look to discover to whom business is socially responsible, and why they are so. Many companies however are socially irresponsible, and I will also seek to discover why they are so, and which motives drive them to do it. Research Findings I have researched both responsible and irresponsible companies through media reports, internet websites and through Business Studies textbooks. Every company behaves in a certain manner, this is their ethos, and it determines their actions. Corporate Social Responsibility (CSR) is a priority for some companies, less so for others. There are varying attitudes to CSR are that it either is a waste of money, or that it improves a reputation and therefore improve business. There are many examples of CSR. This can range form the production of free range, or organic foods, and sustainable products. There are a variety of ways and areas in which a company can be socially irresponsible or responsible, and simply because a company is responsible in one area it does not necessitate that it would be responsible in another. These can include environmental issues, women's issues, health, and social issues, diversity issues and educational issues. Discussion We have seen from the above that there are many responsible and irresponsible companies, ranging from small businesses to large sized multinationals. ...read more.

The punishments include wage deductions, having their ears pulled, being pinched or slapped on the b*****k, being forced to run around the factory yards or having to stand for hours in factory yards (being "dried in the sun"). The survey was conducted between September 10 and October 18 this year (1999) and involved surveying workers from 11 different factories producing for Nike. More than 2,000 workers (57% of respondents) indicated that they had seen workers being subject to this sort of extreme verbal abuse or excessive punishment. Workers also reported that they are forced to work extensive overtime, that it is often extremely hot in work rooms, that access to drinking water is inadequate and that they receive very low wages (77% indicated that their basic wage without overtime was less than $US2 per day). (2) 'Sweatshops make McDonald's toys' Hong Kong: Toys given away with McDonald's meals are being produced with the help of child labourers in a sweatshop factory in China, a newspaper reported yesterday. Children as young as 14 work up to 16 hours a day in the factory packaging Winnie the Pooh, Snoopy, Hello Kitty and other toys, the South China Morning Post said. They are paid �1.90 a day, work seven days a week and live 15 to a room in spartan quarters where they sleep on wooden bunk beds with no mattresses, a Post reporter who infiltrated the factory found. A trade union that has visited the factory, City Toys in Shenzhen, southern China, several times, estimates 20 per cent of the 2,000 workers are under China's legal working age of 16. The company's Hong Kong-based director, Mr Jack Lau Kim-hung, said he knew nothing about underage workers. ...read more.

Beyond tightening up its monitoring of suppliers, it has conducted a root-and branch examination of its business to see where it can lessen its environmental and social impact - and has disarmed critics by enlisting their support. Ikea has given money to UNICEF to set up schools in Indian villages, and to Greenpeace, which Dahlvig describes as its 'roving conscience'. Ikea gave $2.5 million to Greenpeace's campaign to save ancient forests and sources wood only from forests certified by the Forest Stewardship Council. Its catalogue - the longest print-run in the world - is printed on chlorine-free paper. Ikea has increased its purchasing from developing countries from 32 to 48 per cent over the past five years in its relentless drive to keep prices low. The further it goes into such countries, the more important the issue becomes. Dahlvig, age 44, has been CEO only since 1999, but his first big project was to complete a code of conduct for Ikea's suppliers - a three-page document called the Ikea way on the environment, a tortuous process that took a year to complete. I-way, an independent auditor, defines a single set of standards for its 1,400 suppliers - the same rules apply in Sweden (still its main source of supply) as in China. (12) British Airways In an interview with a manager of British Airways I asked: In what ways are British Airways responsible to their local community? BA is committed to developing the community not only within their employees and their families but also within the wider area. We sponsor schools, and organise family events, day trips, and special excursions for disabled children and promote self-awareness within our employees. We have a dedicated education section where our employees can learn new skills or gain qualifications during their spare time." ...read more.