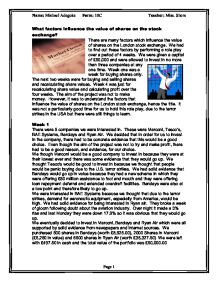 What factors influence the value of shares on the stock exchange?

What factors influence the value of shares on the stock exchange? There are many factors which influence the value of shares on the London stock exchange. We had to find out these factors by performing a role play over a period of 4 weeks. We were given a capital of �50,000 and were allowed to invest in no more than three companies at any one time. Week one was a week for buying shares only. The next two weeks were for buying and selling shares and recalculating share values. Week 4 was just for recalculating share value and calculating profit over the four weeks. The aim of the project was not to make money. However, it was to understand the factors that influence the value of shares on the London stock exchange, hence the title. It was not a particularly good time for us to hold this role play, due to the terror strikes in the USA but there were still things to learn. Week 1 There were 5 companies we were interested in. These were Marconi, Tesco's, BAE Systems, Barclays and Ryan Air. We decided that in order for us to invest in the company, there had to be concrete evidence that this would be a good choice. ...read more.

We had predicted correctly that BP shares would go up. We, however, felt that although Ryan Air shares were increasing constantly in value, they were not generating profit quickly. We decided to look into a company that had been increasing and would generate profit quickly. We soon decided it was Lloyds TSB that we would invest in. But this was only part of the reason, the other part of the reason was that we wanted to gain experience in the world of shares and financial markets. We sold all of our Ryan air shares (�37,115.00 in value) and purchased 5000 Lloyds TSB shares (�34,400 in value) leaving us with �2,859.00 remaining in cash. Week 4 This was the week in which no buying and selling was to take place but just a re-calculation of shares. We made a huge profit from Week 3 in which we were only just recovering to make �747.75 more meaning that we made from the start a �1,150.00 profit which is good considering we suffered a heavy blow in week 2. We were left with �51,150.00 a good finish. What we learned from all the choices we made Marconi - When we purchased Marconi, we were optimistic that they would increase in value. ...read more.

The share value went up for Barclays because it was providing assistance for foot and mouth farmers. It was able to provide this service quickly and therefore helped share value go up. We can conclude therefore that when companies can provide assistance to people in crisis's as big as the foot and mouth in the form of money, it tends to increase share value in a company. BP - BP went up in share value as they had plans to begin a �650 million development in a new oil field just off the coast of Shetland. This instantly aroused consumer interest and the share value of the company rose. If a company plans to make an investment poised to make money this will attract consumer interest and increase share value. Conclusion We have learnt from this product that there are many different factors which affect the value of shares on the London stock exchange. Financial Situation - If the company is in debt then doubtless, its shares value will decrease and if it is making profit there should be no reason why the share value will increase. However, there are other factors which overule this. The fact that a company is in debt does not necessarily mean that its share value Name: Michael Adegoke Form: 10C Teacher: Miss. Shore Page 1 ...read more.