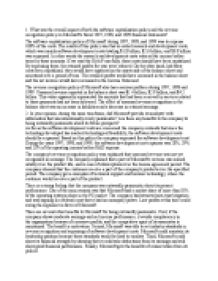 What was the overall impact of both the software capitalization policy and the revenue recognition policy on Microsoft's fiscal 1997, 1998, and 1999 financial statements?

﻿1: What was the overall impact of both the software capitalization policy and the revenue recognition policy on Microsoft's fiscal 1997, 1998, and 1999 financial statements? The software capitalization policy of Microsoft during 1997, 1998, and 1999 was to expense 100% of the costs. The results of this policy was that so called research and development costs, which was mainly software development costs totaling $1,8 billion, $2.6 billion, and $3.0 billion was expensed. In other words the research and development costs reduced the income before taxes by these amounts. If we read the GAAP carefully, these costs should have been capitalized. By expensing these, the retained profits for year were reduced. On the other hand, had these costs been capitalized, they would have appeared on the assets side of the balance sheet and amortized over a period of time. ...read more.

The company had attracted anti-trust litigation and was arguing in a federal court that it had no monopoly power. Low profits at this time could swing the argument in favor of Microsoft. There are several other benefits to Microsoft for being outwardly pessimistic. First, if the company shows moderate earnings and net income performance, it avoids complacency in the organization because of excessive profits, and the competitive spirit of its associates is maintained. The benefit is motivation. Second, Microsoft was able to set industry standards in revenue recognition and expensing of software development costs. Microsoft could maintain its leadership position because these standards would be hard to emulate. Third, Microsoft could show its financial strength by showing that it could take deductions from its earnings and still show good financial performance. Finally, Microsoft gets the benefits of conservatism from its polices. ...read more.