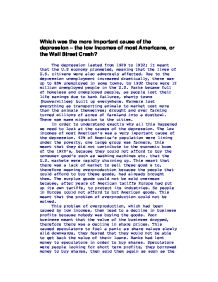 Which was the more important cause of the depression &amp;#150; the low incomes of most Americans, or the Wall Street Crash?

Which was the more important cause of the depression - the low incomes of most Americans, or the Wall Street Crash? The depression lasted from 1929 to 1932; it meant that the U.S economy plummeted, meaning that the lives of U.S. citizens were also adversely affected. Due to the depression unemployment increased drastically, there was up to 80% unemployed in some towns, by 1932 there were 12 million unemployed people in the U.S. Parks became full of homeless and unemployed people, as people lost their life savings due to bank failures, shanty towns (Hoovervilles) built up everywhere. Farmers lost everything as transporting animals to market cost more than the animals themselves; drought and over farming turned millions of acres of farmland into a dustbowl. There was mass migration to the cities. In order to understand exactly why all this happened we need to look at the causes of the depression. ...read more.

Poor business meant that the value of the business dropped, therefore there was a decline in share prices. This caused speculators to fuel a panic as share values slowly slid downwards, they feared that they would not be able to get back the value of their loans. Banks had lent money to speculators in order to buy shares. Speculators were people looking for short term profits, they borrowed money to buy shares, then sold them again as soon as the price had risen, this meant the they could pay off their loans and still have a profit to keep. Speculation was dangerous because it made the stock market unstable. Speculators panicked when share prices slid, and tried to dump their shares. They sold for anything they could get for the shares, before prices decreased even more. Banks had also brought shares in the stock market, but at the last minute they stopped supporting share prices. ...read more.

This again led to lower incomes, less buying, a further decline in business profit, meaning more rapid reduction in the share prices of businesses that were still surviving. Therefore leading to more dumping of any still existing shares, causing last destructions to the Wall Street Crash, finally meaning that any banks that were still operating went bankrupt, again this meant a further reduction in spending and so on. There was a continuous downward spiral in everything, meaning by 1933 America was in the grip of the worst economic crisis the world had seen. I think that from the low incomes of most Americans and the Wall Street crash no one cause can be picked out as the most important, because one lead to the other and vice - versa. Although the low incomes was a long term cause and the Wall Street Cash a short term trigger to the depression they both linked with one another to cause the depression, and then continue in a further downwards spiral to make its consequences so grave. ...read more.