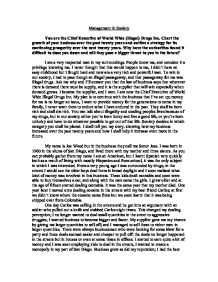 You are the Chief Executive of World Wide (Illegal) Drugs Inc. Chart the growth of your business over the past twenty years and outline a strategy for its continuing prosperity over the next twenty years.

Management in Society You are the Chief Executive of World Wide (Illegal) Drugs Inc. Chart the growth of your business over the past twenty years and outline a strategy for its continuing prosperity over the next twenty years. Why have the authorities found it difficult to close you down and will they pose a bigger threat to you in the future? I am a very respected man in my surroundings. People know me, and consider it a privilege knowing me. I never thought that this would happen to me, I didn't have an easy childhood but I fought hard and now am a very rich and powerful man. To win in our society, I had to pass though an illegal passageway, and that passageway for me was illegal drugs. Ask me why and I'll answer you that the law of business says that wherever there is demand there must be supply, and it is the supplier that will win especially when demand grows. I became the supplier, and I won. I am now the Chief Executive of World Wide Illegal Drugs Inc. My plan is to continue with the business that I've set up; money for me is no longer an issue, I want to provide money for the generations to come in my family, I never want them to endure what I have endured in the past. They shall be born rich and shall die rich. You can talk about illegality and stealing peoples lives because of my drugs, but in our society either you're born lucky and live a good life, or you're born unlucky and have to do whatever possible to get out of that life. Society decides in which category you shall be placed. I shall tell you my story, showing how my business increased over the past twenty years and how I shall help it increase even more in the future. ...read more.

Only a few disapproved my plan and they were taken care of very rapidly. I bought a house in Colombia so that I could be close to my new business partners. Expansion came quickly, my drugs were exported to Europe, South-East Asia and Australia, I didn't bother with Africa because there was hardly any market there, there isn't enough money in the continent. During the 90s I didn't leave Colombia much, the new business partners that I met from different countries around the world came to Colombia to see me, it was much safer. The Colombian authorities are very easy to bribe, they didn't give me any problems. I later learnt that the only reason that they had taken Juan out was because he wasn't careful enough and the American authorities new exactly what he was doing. The Colombian authorities collaborated with the Americans and shot him down. I am now a forty three year old multibillionaire, and have been nominated Chief Executive of World Wide Illegal Drugs Inc by my business partners. I could stop my business now but I still have plans for the next twenty years of my life. I want to continue selling the same drugs to the same areas of the world as I have been doing for the past fourteen years, finding new entries into the different countries, new ways to get around the borders. I want to keep up to date with what the authorities' plans are to stop the drugs market increasing in size, so that I can adapt my strategies to theirs; under no circumstance shall I allow them to adapt their strategies upon mine. I also want to build a family; I am over forty years old and still don't have a wife (although I am seeing someone) or any children. I want a family that will benefit from my fortune as much as I am now: villas, boats, sports cars, anything that they could ever dream of having. ...read more.

Some people take drugs to rebel against society. They feel that they aren't free enough and can't express themselves as they want, so they turn to drugs as a way of putting something between themselves and society (TeenOutReach, 1999). They see this as a way of showing that they are different from what society wants them to be, by doing this they see themselves as independent. What they don't realise though is that by doing this they are actually becoming what they don't want; they are becoming dependant rather than independent, and this dependence is on drugs. Authorities need to do something about these people if they want to win the war on drugs, they must help and take care of these people, and make sure that it doesn't happen to others. They must find out exactly what it is in society that is making people rebel against it, and try to change it for the better. Drugs have made me and many others rich. They will continue making people's fortunes and misfortunes. Authorities have always tried their best to put a stop to this illegal trade but without much success; demand continues to grow and along with it so does supply. They found it difficult to close me down in the past because of the presence of the buyers and my wits in not letting them get close to me, and if they want to do better in the future they'll have to adopt new methods, especially with regards to the buyers. They have started doing this now, helping people with problems and giving anti-drug speeches in schools for example. One important aspect that has not been discussed however is that young people who take drugs don't do it as a mean of escape, an act of rebellion or to fit in, they do it because they like it and for no other reason. And changing the tastes of a whole society of youngsters is going to be a tough one on the authorities. ...read more.