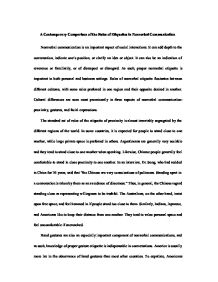 A Contemporary Comparison of the Rules of Etiquettes in Nonverbal Communication

A Contemporary Comparison of the Rules of Etiquettes in Nonverbal Communication Nonverbal communication is an important aspect of social interactions. It can add depth to the conversation, indicate one's position, or clarify an idea or object. It can also be an indication of reverence or familiarity, or of disrespect or disregard. As such, proper nonverbal etiquette is important in both personal and business settings. Rules of nonverbal etiquette fluctuates between different cultures, with some rules preferred in one region and their opposite desired in another. Cultural differences are seen most prominently in three aspects of nonverbal communication: proximity, gestures, and facial expressions. The standard set of rules of the etiquette of proximity is almost invariably segregated by the different regions of the world. ...read more.

Similarly, Indians, Japanese, and Americans like to keep their distance from one another. They tend to value personal space and feel uncomfortable if encroached. Hand gestures are also an especially important component of nonverbal communications, and as such, knowledge of proper gesture etiquette is indispensable in conversations. America is usually more lax in the observance of hand gestures than most other countries. To expatiate, Americans typically do not consider standing with their hand on their hip as indecorous. Likewise, they think nothing of leaving their hand in their pocket or crossing their legs. Mexicans, Cambodians, and the Japanese, on the other hand, regard those actions respectively as impolite and improper. ...read more.

In western countries such as the US, Germany, and Britain, eye contact demonstrates respect, sincerity, and trust. However, quite the opposite is true of Asian countries. Direct eye contact is interpreted in several ways in different Asian countries, but all with negative connotations. In Japan, eye contact implies aggression, in China, intrusiveness, and in India, disrespect. The Chinese and Japanese smile when they feel under pressure or embarrassed. Americans interprets the act of smiling as a sign of friendship, so they might interpret an embarrassment smile as an act of acceptance. In conclusion, while gestures, facial expressions, and proximity account for several facets of nonverbal communication, it does not and cannot incorporate all of the bodily actions done while in conversation. However, they do offer a glimpse into the complicated scheme of social etiquette. ...read more.