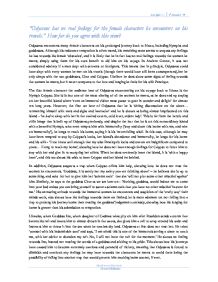 Odysseus has no real feelings for the female characters he encounters on his travels. How far do you agree with this view?

"Odysseus has no real feelings for the female characters he encounters on his travels." How far do you agree with this view? Odysseus encounters many female characters on his prolonged journey back to Ithaca, including Nymphs and goddesses. Although his resistance temptation is often tested, his remaining nostos seems to surpass any feelings he has towards his female 'obstacles', and it is likely that he in fact has no real feelings towards the women he meets; simply using them for his own benefit to aid him on his voyage. In Ancient Greece, it was not considered adultery if a man slept with servants or foreigners. This means that in principle, Odysseus could have slept with every woman he met on his travels (though there would have still been consequences), but he only sleeps with the two goddesses, Circe and Calypso. I believe he does show some signs of feeling towards the women he meets, but it never compares to the love and longing he feels for his wife Penelope. The first female character the audience hear of Odysseus encountering on his voyage back to Ithaca is the Nymph Calypso. She is in fact one of the most alluring of all the women he meets, as he does end up staying on her beautiful island where 'even an immortal visitor must pause to gaze in wonder and delight' for almost ten long years. ...read more.

and showing respect. He is able to manipulate the women he meets to help him - 'pity me, princess... Do direct me to the town and give me some rags'. Although he does use women in this way and does not show any true feelings towards them, he is respectable in his approach, asking Nausicaa and her maids 'stand back over there and leave me wash...I should be ashamed to stand naked in the presence of elegant ladies'. In the mortal Nausicaa's case though, he does leave her feeling attracted to him - 'I wish I could have a man like him for my husband', and Calypso was also left wanting him to stay with her for eternity; although Odysseus himself may not have feelings towards the women he encounters, he does induce the feelings they have towards him. His respect towards young women is shown when Athena is 'disguised as a young girl carrying a pitcher' to aid him on his way to the palace 'I wonder if you could show me the way to the house of Alcinous... I've had a hard time'. No real feelings are shown at all towards the women in this book seeing as home seems to be the only thing on his mind at the moment after having lost all his men and after his long period of hopelessness on Calypso's island. ...read more.

It's time you thought of Ithaca'. It is only when Ithaca is mentioned that Odysseus is persuaded to leave - 'my proud heart was convinced'; if he did have any feelings towards Circe, he would have stayed, or at least contemplated staying for a little longer. Overall I consider that Odysseus does not care about these women. He loves his wife dearly - '[Penelope] is never out of your thoughts'- and is happy to leave every island he sets foot upon if he thinks he is heading for home. Circe does seem to hold a certain place in Odysseus' heart, because she is the one he stays with voluntarily and has to be persuaded to leave, but Odysseus leaves the others without a backward glance - 'with a happy heart' in fact, in the case of Calypso. Odysseus's affection and respect for Nausicaa seems to be purely polite and possibly only to suit his own means, or at the most brotherly- he wants the best for her. As for Arete, Odysseus never had affectionate feelings for her. He needs her support to get home, and this is the only reason he shows respect for her, except perhaps because she is a wise woman. Throughout the Odyssey, Odysseus longs for his homeland, and is unable to feel much but grief at his prolonged absence. ?? ?? ?? ?? Arta Ajeti 12A 4th December '10 Miss Shaw and Miss Smith Classical Civilisation ...read more.