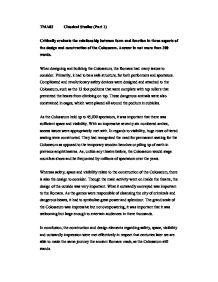 TMA03 Classical Studies (Part 1) Critically evaluate the relationship between form and function in three aspects of the design and construction of the Colosseum. Answer in not more than 300 words. When designing and building the Colosseum, the Romans had many issues to consider. Primarily, it had to be a safe structure, for both performers and spectators. Complicated and revolutionary safety devices were designed and attached to the Colosseum, such as the 13 foot podiums that were complete with top rollers that prevented the beasts from climbing on top. These dangerous animals were also constrained in cages, which were placed all around the podium in cubicles. As the Colosseum held up to 45,000 spectators, it was important that there was sufficient space and visibility. With an impressive seventy six numbered arches, access issues were appropriately met with. In regards to visibility, huge rows of tiered seating were constructed. They had recognised the need for permanent seating for the Colosseum as opposed to the temporary wooden benches or piling up of earth in previous amphitheatres. As, unlike any theatre before, the Colosseum would stage countless shoes and be frequented by millions of spectators over the years. ...read more.

As the games became more popular the public became more demanding. C2 in resource book 1 offers an extract, Apuleis, "The ass in the arena", that confirms this in his account of the audience demanding a soldier fetch a condemned woman. The audience became more involved in the shows and grew tired of the monotony, which influenced the growth of the games both in magnitude and splendour. The games were primarily important because of what they offered those involved. Many people profited from the games, in particular those who hosted them. The games conveyed the habits of the upper class, for anyone who hosted the games it was a measure of their wealth as the expense was enormous. Though it was a necessary expense for anyone wishing to pursue a public career, as they had to acquire the vote of the Plebians. A new order of merchants and landowners gained fame and popularity because they were able to afford great expenses to stage the games, increasing their status and influence. C3, "Apuleis, The Robbers tale" writes about a host as a man 'of high birth, great wealth and liberality', confirming the status of many who hosted the games. ...read more.

It can't be assumed that the games were favoured by everyone, even in this time people argued over animal rights and the ethics of capital punishment. Cicero questions the measure of enjoyment the games can offer in C6 'Pompey's shows', "But what pleasure can it be to a man of refinement". Also, in his philosophical discussion (C8) he argued that some people regarded battles as "cruel and inhuman" and Seneca in Letter 7 quotes the games as "sheer butchery". So it is important, when answering to why the games were important to the Romans, that everyone didn't acknowledge them favourably, though they are still important as they play a principal role in the history of Rome. In conclusion, the games were not only important because of what they could offer people in respect of status and prestige, material benefits and freedom. The games were also important to Romans because of where they were held and what the Colosseum conveyed, a cultural symbol of the politics of ancient Rome. The Colosseum and the games were and still are a great inspiration for many architects, poets and artists, and no doubt will be the subject of many philosophical and historical debates to come. ...read more.