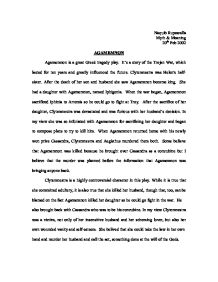 Naquib Rupawalla Myth & Meaning 20th Feb 2002 AGAMEMNON Agamemnon is a great Greek tragedy play. It's a story of the Trojan War, which lasted for ten years and greatly influenced the future. Clytemnestra was Helen's half-sister. After the death of her son and husband she saw Agamemnon become king. She had a daughter with Agamemnon, named Iphigenia. When the war began, Agamemnon sacrificed Iphinia to Artemis so he could go to fight at Troy. After the sacrifice of her daughter, Clytemnestra was devastated and was furious with her husband's decision. In my view she was so infuriated with Agamemnon for sacrificing her daughter and began to compose plans to try to kill him. ...read more.

While it is true that she committed adultery, it is also true that she killed her husband, though that, too, can be blamed on the fact Agamemnon killed her daughter so he could go fight in the war. He also brought back with Cassandra who was to be his concubine. In my view Clytemnestra was a victim, not only of her insensitive husband and her scheming lover, but also her own wounded vanity and self-esteem. She belived that she could take the law in her own hand and murder her husband and call the act, something done at the will of the Gods. ...read more.

Another way to try to justify her actions is her involvement with Aegisthus. While planning for the murder of her husband Clytemnestra said that one of the reasons she was doing it, was because he was bringing home a mistress. I think that she is forgetting that she had done something just as bad. How can she expect to be forgiven for her cheating because of a curse? I think that most of the opinions on Clytemnestra are correct and she definitely was at fault for a lot of things in her life including her own death. --------------------------------- ...read more.