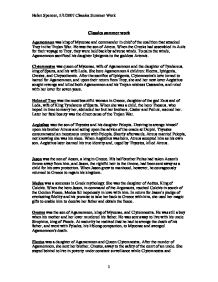 Classics summer work Agamemnon was king of Mycenae and commander in chief of the coalition that attacked Troy in the Trojan War. He was the son of Atreus. When the Greeks had assembled in Aulis for their voyage to Troy, they were held back by adverse winds. To calm the winds, Agamemnon sacrificed his daughter Iphigenia to the goddess Artemis. Clytemnestra was queen of Mycenae, wife of Agamemnon and the daughter of Tyndareus, king of Sparta, and his wife Leda. She bore Agamemnon 4 children: Electra, Iphigenia, Orestes, and Chrysothemis. After the sacrifice of Iphigenia, Clytemnestra's love turned to hatred for Agamemnon, and upon their return from Troy, she and her new lover Aegisthus sought revenge and killed both Agamemnon and his Trojan mistress Cassandra, and ruled with her lover for seven years. Helen of Troy was the most beautiful woman in Greece, daughter of the god Zeus and of Leda, wife of King Tyndareus of Sparta. When she was a child, the hero Theseus, who hoped in time to marry her, abducted her but her brothers, Castor and Pollux, rescued her. Later her fatal beauty was the direct cause of the Trojan War. Aegisthus was the son of Thyestes and his daughter Pelopia. ...read more.

He made a hazardous journey by land, clearing the road of bandits and monsters. Theseus arrived at Athens wearing a sword and a pair of sandals that Aegeus had left in Athens for his son in Troezen. Medea, Aegeus's wife, attempted to poison Theseus, but as soon as Aegeus recognized the heirlooms, he proclaimed Theseus his son and heir and banished Medea. Theseus Slaying a Centaur Hippolytus was the son of Theseus and Hippolyte, queen of the amazons. He was an excellent hunter and charioteer, and he was the devoted son of Artemis, goddess of the hunt. Hippolytus spurned all women, and when his stepmother, Phaedra, fell in love with him, he rejected her advances. In despair at his refusal, Phaedra committed suicide, leaving a letter accusing Hippolytus of having attempted to ravish her. Theseus, believing his son guilty, invoked his father, Poseidon, god of the sea, to destroy Hippolytus. As the young man drove his chariot along the shore, Poseidon sent a sea monster that frightened his horses; they ran away, dashing the chariot to pieces. Mortally wounded, Hippolytus was carried to his father, who had in the meantime learned from Artemis that his son was innocent. ...read more.

A prophecy had warned that Paris would one day cause the ruin of Troy and, therefore, Priam exposed him on Mount Ida, where he was found and brought up by shepherds. He was tending his sheep when an argument arose among the goddesses Hera, Athena, and Aphrodite as to who was the most beautiful. The three goddesses asked him to be the judge. Each tried to bribe him, Hera promising to make him ruler of Europe and Asia, Athena to help him lead Troy to victory against the Greeks, and Aphrodite to give him the most beautiful woman in the world, Helen, the wife of Menelaus, king of Sparta. Paris favoured Aphrodite, even though at the time he was in love with the nymph Oenone. His decision made Hera and Athena bitter enemies of his country. This and the abduction of Helen, in Menelaus's absence, brought about the Trojan War. Menelaus was the King of Sparta. One of the Greeks who besieged Troy to retrieve his wife Helen from the Trojan Paris. Helen had been bewitched by the Goddess of Love into eloping with Paris, and in the phrase of the poet Marlowe her face launched a thousand ships. These bore the Greek allies of Menelaus to the siege and ultimate downfall of Troy. ...read more.