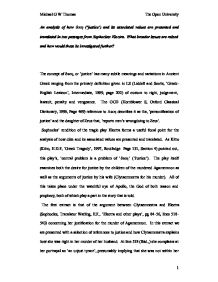 An analysis of how dikh ('justice') and its associated values are presented and translated in two passages from Sophocles: Electra. What broader issues are raised and how would these be investigated further?

An analysis of how ???? ('justice') and its associated values are presented and translated in two passages from Sophocles: Electra. What broader issues are raised and how would these be investigated further? The concept of ????, or 'justice' has many subtle meanings and variations in Ancient Greek ranging from the primary definition given in LS (Liddell and Scotts, 'Greek-English Lexicon', Intermediate, 1889, page 202) of custom to right, judgement, lawsuit, penalty and vengeance. The OCD (Hornblower S, Oxford Classical Dictionary, 1996, Page 469) reference to ???? describes it as the, 'personification of justice' and the daughter of Zeus that, 'reports men's wrongdoing to Zeus'. Sophocles' rendition of the tragic play Electra forms a useful focal point for the analysis of how dike and its associated values are presented and translated. As Kitto (Kitto, H.D.F, 'Greek Tragedy', 1997, Routledge Page 131, Section 4) pointed out, this play's, 'central problem is a problem of '????' ('Justice'). The play itself examines both the desire for justice by the children of the murdered Agamemnon as well as the arguments of justice by his wife (Clytaemnestra for his murder). All of this takes place under the watchful eye of Apollo, the God of both reason and prophecy, both of which play a part in the story that is told. ...read more.

The portrayal of Orestes and Electra is also very interesting in that Electra's character is shown in a pitiful, depressed way and obsessed with vengeance upon her mother and her lover Aegisthus. Orestes, especially towards the play appears to take no pleasure in the task he must perform, as though it was his duty. The female is thus bent upon revenge whereas the male is merely carrying out his duty. This idea is consistent with Sophocles' target audience of male citizens but how close is it to the reality of that age? What other information is available on matricide and also the difference in attitude of the different sexes? Sophocles was targeting a specific audience with his play but is his work a fair representation of the morals and attitudes of 5th century Athens. The story of Electra is based upon the legend of the house of Atreus and thus a portrayal of the earlier attitudes towards justice, revenge and order. The entire play is concerned with a series of murders and how just or unjust they are. The ending of Electra produces according to Watling (Sophocles, Translator Watling, E.F., 'Electra and other plays', pg 215), a very, 'compact and completed story'. ...read more.

Are there similar examples in the courts and if so what arguments were presented and what was the verdict? Adkins (Adkins, A.W.H. 'Merit and Responsibility: A Study in Greek Values', Oxford 1960) work appears to cover much of this ground and further reading here would be invaluable. His work in the area of (Adkins, A.W.H. 'Honour and Punishment') and (Adkins, A.W.H. 'Problems in Greek Popular Morality') also cover a great range of sources that could be of use. All of Adkins work is relatively old though and more recent study does seem more difficult to find. The bulk of research in this area appears to be between the 1950s-1970s with the odd exception. Williams. B has written several pieces on morality, ethics and luck and these may be of use to compare to Adkins. The ideas presented in Electra would require further study in both modern literature concerning morals, ethics and justice whilst as well as comparisons to other plays of the same author and also plays of other tragedians. Ideally the analysis of the original Greek would help understand the context of some of the concepts but failing that, several different translations could assist. Bibliography Liddell and Scotts, 'Greek-English Lexicon', Intermediate, 1889, page 202 Hornblower S, Oxford Classical Dictionary, 1996, Page 469 Kitto, H.D.F, 'Greek Tragedy', 1997, Routledge Page 131, Section 4 Sophocles, Translator Watling, E.F., 'Electra and other plays', pg 84-56, lines 518-543 Blundell, M.W. ...read more.