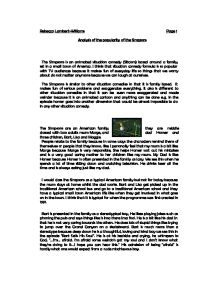 Analysis of the popularity of the Simpsons.

Rebecca Lambert-Williams Page 1 Analysis of the popularity of the Simpsons The Simpsons is an animated situation comedy (Sitcom) based around a family, set in a small town of America. I think that situation comedy formula is so popular with TV audiences because it makes fun of everyday life so things that we worry about do not matter anymore because we can laugh at ourselves. The Simpsons is similar to other situation comedies in that it is family based. It makes fun of serious problems and exaggerates everything. It also is different to other situation comedies in that it can be even more exaggerated and made weirder because it is an animated cartoon and anything can be done e.g. in the episode homer goes into another dimension that would be almost impossible to do in any other situation comedy. The Simpsons are an American family; they are middle classed with two adults mum Marge, and dad Homer and three children, Bart, Lisa and Maggie. People relate to the family because in some ways the characters remind them of themselves or people that they know, like I personally feel that my mum is a bit like Marge because Marge is very responsible, She helps Homer sort out his mistakes and is a very good caring mother to her children like my mum. ...read more.

In the "A Streetcar Named Marge" episode, Marge explains to Homer, "...I spend all day home with Maggie. Sometimes it's like I don't even exist," to which Homer, eyes fixed on the television, robotically responds with, "Sounds interesting." Lisa is presented in the family as a stereotypical girl. She is a member of the club Mensa which only accepts members if they possess a genius IQ level. Lisa is often the voice of reason for the family. But she is so much more than a stereotype because not only does her family ignore her exceptional talents, she is a social outcast and knows it. Maggie Simpson has done a lot in her one year of life. She's learned to spell her own name with an Etch A Sketch, she's wandered the town of Springfield all by herself, and she's shot Springfield's richest man because he attempted to steal her lollipop. So she's definitely not a stereotypical baby. Typical situations for the Simpsons are: * Going to school * Going to work * Going to church * Eating dinner * Bart being naughty * Bart getting told off * Bart getting bad grades * Bart and Lisa solving mysteries * Bart and Lisa arguing * Lisa getting good grades * ...read more.

Also people probably prefer watching sky one because it shows newer ones. Rebecca Lambert-Williams Page 4 Reasons people become fans of the programme are Advertising-there are so many adverts that it is hard not to be a fan, Peer Pressure-if all your friends are watching it then you will want to join in, addiction-once you have seen a few episodes then you are hooked and merchandise-the merchandise is very appealing. Other media referred to in The Simpsons are Text, sound, graphics, print and video. Other products developed from the programme are: * Videos * DVD's * Music-the simpsons sing the blues * Calendars * Books-Bart Simpsons guide to life * Clothing-Bart t-shirt * Alarm clocks * Ornaments * Games-Special Simpson editions of Monopoly, Cludo and Uno * Posters-Springfield The Simpson's has to be best show ever for me. The writing is clever and witty, the stories are hilarious, and the characters are magnificent. The things I enjoy more are that it's not very predictable and that the actual story is also quite often totally useless, but hilarious I hate when TV tries to teach you a lesson. The Simpsons is the greatest, why else would it have lasted for this long? ...read more.