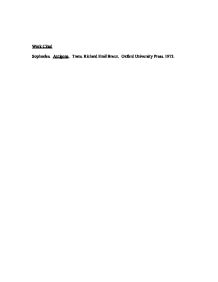 Antigone and Kreon battle a philosophical war based on their beliefs of what is right and wrong.

Work Cited Sophocles. Antigone. Trans. Richard Emil Braun. Oxford University Press. 1973. Antigone and Kreon The accepted wisdom of a culture is most accurately, and most often, reflected in the constructive efforts of its general population. Most artisans, authors and historians of Ancient Greece, for example, convey in their art and literature is the norms of everyday life in Ancient Greece. The play Antigone by Sophocles is one of the most distinguished pieces of theatrical work that reflects upon Greek mythology and culture. Antigone has several themes and circumstantial settings that can be indirectly referred or related to in modern society. Sophocles uses various and strategically placed characters to present his play as well as his themes. Sophocles develops a character in his play Antigone that is the definition of brave and courageous. ...read more.

Antigone is portrayed as a woman acting out of obligation and duty, to the gods, her family, and her conscience. She faces overwhelming odds and incredible hardships for doing what she knew was right, which was what led her to her own death. Kreon is to blame for this tragedy because of his insecurity, his insensitivity, and his stubbornness. Kreon is arrogant in thinking it is acceptable to use his position of power to deny the wishes of the gods. Kreon's regard for the laws of the city causes him to abandon all other beliefs. He feels that all should obey the laws set forth by him, even if other beliefs, moral or religious, state otherwise. Antigone herself charges Kreon with this fact, "The laws that they have made for men are well marked out. ...read more.

The rage he feels proves that he perceives family bonds to be of utmost significance, for he takes very negatively to the idea that those who are the most rebellious are the ones who are supposed to be his most loyal followers, as they are connected by a family bond. The contradictions between the beliefs of Kreon and Antigone are strong throughout the play. Both have well-structured arguments, but neither completely dominates the other. Both sides were just; all beliefs were supported. Kreon was forced to decide the unanswerable, decipher the encoded, complete the impossible, and determine right from wrong when there was no clear answer. Antigone and Kreon By: Sarah Pinsonneault Assignment Presented for the Course Families in Conflict Taught by Prof. Yves Saint-Pierre First essay re-write Winter Semester, 2003 Cegep John Abbott College ...read more.