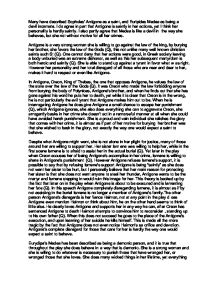 Antigone is a saint, whereas Medea is a devil incarnate&quot; do you agree?

Many have described Sophcles' Antigone as a saint, and Euripides Medea as being a devil incarnate. I do agree in part that Antigone is saintly in her actions, yet I think her personality is hardly saintly. I also partly agree that Medea is like a devil in the way she behaves, but she not without motive for all her crimes. Antigone is a very strong woman she is willing to go against the law of the king, by burying her brother, she favors the law of the Gods (Q), this not unlike many well known christian saints such St (Q). One cannot deny that her actions were good, in Greek society leaving a body unburied was an extreme dishonor, as well as this her subsequent martyrdom is both heroic and saintly (Q). She is able to stand up against a tyrant in favor what was right. However her personality and her total disregard of all those who are near and dear to her, makes it hard to respect or even like Antigone. In Antigone, Creon, King of Thebes, the one that opposes Antigone, he values the law of the state over the law of the Gods (Q). ...read more.

Antigone's complete disregard for those that care for her is hardly the way one would expect a saint to behave. Eurydipe's Medea has been described as being a demonic person, and it is true that throughout the play she does behave in a way that is demonic. She is a strong woman and she is willing to do whatever is necessary to punish those that have wronged her, or wronged those that she loves. She does many wicked things in her lifetime, yet everything she has done has been for a decent reason, despite this no one can excuse Medea's behavior, she kills her own children a completely unforgivable and evil action. However while the way she behaves is undoubtedly similair to that of a devil, yet unlike a devil she does not kill for no reason, and neither does she kill for pleasure. It is not very fair to describe Medea as a devil incarnate, if she was a devil incarnate she would just kill anyone she could and just for the fun of it. Throughout the play, and even before the play is set, Medea commits a number of evil acts. ...read more.

While Medea just completely disregards the role which she is expected to follow, the only time she behaves the way a Greek woman was expected to is when she is manipulating Creon and she does so in a way that is almost mocking to all the woman who allow themselves to be cowed by men (Q). Both Antigone and Medea are willing to break the laws of the state in order to do whats right, yet while the law that Antigone breaks is minor when compared to Medea's mass murder; but I'm sure that if Antigone thought that murder was necessary she would have done it without thinking twice. Ignoring there many similarities they do have their differences, Antigone does a good deed yet has an infuriatingly selfish and proud personality (Q). While Medea does something truly evil, yet does not take any pride in her crimes. In conclusion, I believe that Antigone's actions are certainly saintly, but her personality and arrogance make it hard to see her as being a saint. On the other hand Medea certainly does things which are certainly wicked, yet her motives make it hard to describe her as being a devil. ...read more.

This candidate answers the question by addressing Medea and Antigone in turn. From the introduction, we have an idea where the candidate is heading which is good, as it helps the coherence of their argument. There is no comparison of ...

This candidate answers the question by addressing Medea and Antigone in turn. From the introduction, we have an idea where the candidate is heading which is good, as it helps the coherence of their argument. There is no comparison of the two until the penultimate paragraph but this works; we have been given the candidate's opinions and then he/she compares them. The conclusion and introduction are short and similar but say all that is necessary; perhaps to expand on the introduction, I might mention their status as women, both in the time of the plays (5th century Athens) and in the bronze age setting of the play. The writer makes a variety of points, making the essay interesting to read.

As aforementioned, the writer makes a wide variety of points which is suitable for this level of qualification. It shows they have thought widely around the topic and makes it more interesting. There are some points which I don't quite agree with however; for example, when the author says that both Medea and Antigone defy "the commonly accepted role of women", I only think that Medea does; indeed, Antigone, in mourning for her brother actually is fulfilling the woman's role (it is just that it is in conflict with the will of Creon). Also, their assumption that Antigone would commit murder, like Medea, seems rather too dubious to me. Furthermore, their point that Ismene was ready to support Antigone doesn't seem right to me; Ismene refuses to bury Polynices at the beginning of the play. This indicates a mis-interpretation of the play. Therefore, although their point that others supported Antigone is correct, the evidence used is not suitable. A lot of the essay is spent recounting the story of each tragedy but I feel this is necessary as, often, what is recounted is valuable as a point to the essay itself and the detailed knowledge of background shows a full understanding of the play. For example, when they bring in Ismene as a good representation of women, it shows sensitive thinking around the question. The essay also successfully addresses both the good sides and bad sides of the two characters and, although sometimes a little repetitive concerning Antigone's "personality", we are given motives for their behaviour as well as sound judgement as to whether they are justified. Sometimes the use of language in this piece lets it down a bit, however, as it is not consistently sophisticated and is often repetitive. However, it is clear. Perhaps to improve, I would develop the conclusion a bit more by introducing perhaps a rhetorical device, just to add a bit more personality to the essay but this is just a personal preference!

There are very few spelling errors in this piece but one at the very beginning doesn't set a good tone for the rest of the essay - "Sophcles". Apart from this, the use of grammar is sound although sometimes, I think it would be useful to ease off the use of commas and vary it, by using full stops and semi-colons. This would make the essay read well and would also just look more sophisticated, otherwise it gets quite list-y and hard to see where the sentence is going. Although the structure is slightly rigid (one play, the other play, comparison), it works as a clear way of setting out the argument.