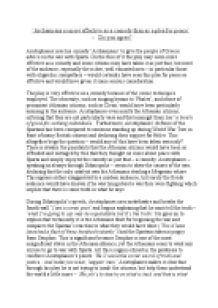 Archarnians is more effective as a comedy than as a plea for peace Do you agree?

﻿?Archarnians is more effective as a comedy than as a plea for peace? * Do you agree? Aristophanes uses his comedy ?Archarnians? to give the people of Greece advice on the war with Sparta. On the face of it the play may seem more effective as a comedy and some citizens may have taken it as just that, but most of the audience, especially the richer, well educated men ? in particular those with oligarchic sympathies ? would certainly have seen this plea for peace as effective and would have given it some serious consideration. The play is very effective as a comedy because of the comic techniques employed. The obscenity, such as singing hymns to ?Phales?, and abuse of prominent Athenian citizens, such as Cleon, would have been particularly amusing to the audience. Aristophanes even insults the Athenian citizens, inferring that they are not particularly wise and that amongst them lies ?a bunch of good-for-nothing individuals?. Furthermore, Aristophanes? defence of the Spartans has been compared to someone standing up during World War Two in front of many British citizens and declaring their support for Hitler. ...read more.

had the Spartans taken a puppy from Seriphos. This is significant because Seriphos is one of the most insignificant states in the Athenian alliance, yet the Athenians seem to want any excuse to go to war with Sparta. All this is again echoed in the parabasis to reinforce Aristophanes?s points. ?He?ll wield the comic sword of truth and justice?and make you wiser, happier men.? Aristophanes makes it clear that through his play he is not trying to insult the citizens, but help them understand the world a little more ? ?His job?s to teach you what is best, and that is what he?ll do.? Throughout the play Aristophanes draws parallels with the tragic play ?Telephos?, including many quotes and using similar actions such as dressing in rags and threatening to kill something that is dear to many people ? in his case a bundle of coals. This is used primarily for comic effect but could also show that he is willing to speak with his head over a block, insinuating that this is something he feels very strongly about and is therefore very serious. ...read more.

Aristophanes goes on to show throughout the play that it is better to be at peace than at war. He shows how well Dikaiopolis is doing in comparison to others that have not made peace, such as Lamachus, who goes to war and is injured while Dikaiopolis is partying and drinking. This idea is emphasized mostly in the market scene which the Athenians would have been able to relate to as trade ? especially for delicacies such as eels ? was affected by the war. This would make the citizens realise how much better off they are in times of peace than in times of war. Overall, although Aristophanes uses a comic play to get his plea across, it is very effectively done and should make the audience reconsider war with Sparta. He has made them realise firstly that the Spartans were not solely to blame and that ultimately war is never a good thing as it harms one?s own economy and wellbeing. Therefore the statement is disproved as the play would have left the citizens of Athens thinking seriously about their true reasons for going to war. Jessica Ellis, 890 words ...read more.