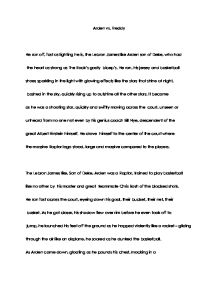 Arden vs. Freddy He ran off, fast as lighting he is, the Lebron James like Arden son of Deke, who had the heart as strong as The Rock's godly bicep's. He ran, his jersey and basketball shoes sparkling in the light with glowing effects like the stars that shine at night, bashed in the sky, quickly rising up to outshine all the other stars. It became as he was a shooting star, quickly and swiftly moving across the court, unseen or unheard from no one not even by his genius coach Bill Nye, descendent of the great Albert Einstein himself. He drove himself to the center of the court where the massive Raptor logo stood, large and massive compared to the players. The Lebron James like, Son of Deke, Arden was a Raptor, trained to play basketball like no other by his master and great teammate Chris Bosh of the blocked shots. He ran fast across the court, eyeing down his goal, their bucket, their net, their basket. As he got closer, his shadow flew over rim before he even took off to jump, he launched his feet off the ground as ...read more.

Freddy bowed his head down in shame, thought about it for a couple of moments and yelled to Johan the almighty, "Never, never will I give up, I can do it , I will defeat the Raptors." Johan unwilling to disappoint his by far best player on the team allowed him to stay on the court while respecting his bravery from the bench. Freddy had the ball on offense trying to look for an opening where he would shot the basketball, but the Raptors defense stood tall and fierce. He finally seen an opening around Arden and his teammate Bosh, he stepped in smoothly as he shot the basketball. But he was denied, almost instantly by Chris Bosh of the blocked shots. As Bosh waved his fingers gloating nothing can pass him, the giants retrieved the ball back to their possession. Still unwilling to give up, Freddy was given the ball back to him by his close friend Vince Carter of the slam dunk. Freddy knew what to do, how to past the Raptors ferocious defense. ...read more.

Freddy stared down Arden as the basketball was inbounded to him, Freddy playing defense tightly and aggressively on Arden. Arden seemed trapped with nowhere to go, Freddy was smiling thinking he has him on lock down defense. Arden looked frustrated drove inside the lane and pretending to fall down, Freddy surprised and happy at the same time ran to get the basketball, all of a quick sudden Lebron like Arden got up crossed Freddy as he soared over him. Freddy caught by surprised was still determined to stop Arden as he jumped with him. Like a rocket blasting off into space, Arden dunked the basketball over Freddy's face. As Freddy landed down in embarrassment, he twisted his ankle, falling on the floor. Johan his mighty coach watched him, his team watched him, the whole crowd watched him as he limped his way out of the gym in great shame. As he was limping, the great Arden mocked him as he started to limp also, the crowd exploded in laughter. Arden then took off his jersey and laid it down on centre court on the Raptor logo and yelled, "I am the Best." ...read more.