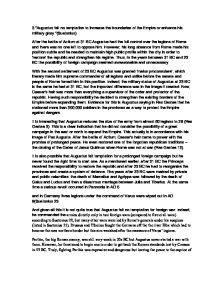 3."Augustus felt no temptation to increase the boundaries of the Empire or enhance his military glory."(Suetonius) After the battle of Actium at 31 BC Augustus had the full control over the legions of Rome and there was no one left to oppose him. However, his long absence from Rome made his position subtle and he needed to maintain high public profile within the city in order to 'restore' the republic and strengthen his regime. Thus, in the years between 31 BC and 23 BC the possibility of foreign campaign seemed unreasonable and unnecessary. With the second settlement of 23 BC Augustus was granted 'maius proconsulare', which literary made him supreme commander of all legions and unlike before the senate and people of Rome forced him in this position. ...read more.

After the battle of Actium, Caesar's heir came to power with the promise of prolonged peace. He even restored one of the forgotten republican traditions - the closing of the Gates of Janus Quirinus when Rome was not at war (Res Gestae 13). It is also possible that Augustus felt temptation for a prolonged foreign campaign but he never found the right time to start one. As a mentioned earlier, after 31 BC the Princeps received the responsibility to restore the republic and after 23 BC he had to reorganise the provinces and create a system of defence. The years after 23 BC were marked by private and public calamities: the death of Marcellus and Agrippa was followed by the death of Gaius and Lucius and then a disastrous marriage between Julia and Tiberius. ...read more.

Truly, fighting Parthia was expensive and dangerous but leaving the peace to the caprice of the Eastern king was unreasonable. Here Augustus came with the brilliant idea of creating 'buffer' states which would defend the borders of the Empire. The most important of these was Armenia and Augustus often intervened there to strengthen the government as proven by Res Gestae 27. In conclusion, it is difficult whether Augustus did not feel temptation for foreign war or did not have the opportunity to start one. The Empire was so big that there were few territories worth fighting for and with the creation of buffer states there were even fewer. Augustus major responsibility was to 'build firm and lasting foundations for the commonwealth' (Suetonius 28) and that is what he did. But war-lover or not, the Empire under Augustus was bigger than even before and for first time definite border were defined. ...read more.