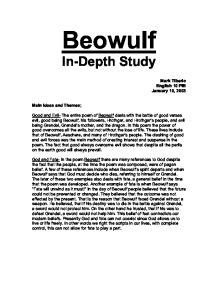 Beowulf In-Depth Study Mark Tiberio English 10 PIB January 10, 2003 Main Ideas and Themes; Good and Evil- The entire poem of Beowulf deals with the battle of good verses evil, good being Beowulf, his followers, Hrothgar, and Hrothgar's people, and evil being Grendel, Grendel's mother, and the dragon. In this poem the power of good overcomes all the evils, but not without the lose of life. These lives include that of Beowulf, Aeschere, and many of Hrothgar's people. The clashing of good and evil forces was the main method of creating interest and suspense in the poem. The fact that good always overcame evil shows that despite all the perils on the earth good will always prevail. God and Fate- In the poem Beowulf there are many references to God despite the fact that the people, at the time the poem was composed, were of pagan belief. A few of these references include when Beowulf's spirit departs and when Beowulf says that God must decide who dies, referring to himself or Grendel. The later of these two examples also deals with fate, a general belief in the time that the poem was developed. ...read more.

The wastelands are also symbolic of the lands that the monster has plagued by its presence. It is not possible for a monster to live in a nice place because they themselves are repulsive, they poison the land, hence the wasteland. Herot- Herot is symbolic of peace, happiness, loyalty, safety, reward, and kindness. It was built by the king as a place his people could go to so they could celebrate victory. It was a reward for his people's loyalty. It was because of the happiness and celebration in this place the Grendel reached havoc on it for twelve years. Light and Darkness- Light is symbolic of good and all that is good, while darkness is symbolic of evil and all that is evil. The two battles Beowulf fought, against Grendel and his mother, took place in the dark, in an evil setting. Light is also creates an atmosphere of happiness while darkness creates an atmosphere of hatred and death. Light and darkness serves as a symbol for two of the major themes of the book which are good and evil, and life and death, light being symbolic of good and life, and darkness being symbolic of evil and death. ...read more.

Comparison to The Odyssey; The two poems The Odyssey and Beowulf are very similar in that they are both about a hero having an adventure. In both poems the heroes, Odysseus and Beowulf, defeat many monsters and return home victories. When both Odysseus and Beowulf return home they discover a problem. Odysseus's home is filled with suitors while Beowulf's kingdom is plagued by a dragon (however this did not happen till long after he arrived home.) Both heroes also overcome this problem at home, Odysseus by killing the suitors and Beowulf by killing the dragon. Finally both poems are filled with death, blood, monsters, war, and victory. The two poems The Odyssey and Beowulf have a few differences, the biggest one being that Odysseus prevailed through all of his battles, while Beowulf perished on his last battle against the dragon. Another difference is that Beowulf goes of on an adventure while Odysseus is merely trying to return home. In The Odyssey the Gods are often talked about. Although in Beowulf God is also talked about, his character is not developed to the extent that the Gods are developed to in The Odyssey. Finally in The Odyssey the monsters are stumbled upon by chance by Odysseus, while in Beowulf, the monsters are being sought out by the hero. ...read more.