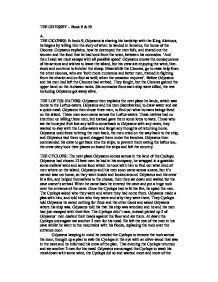 THE ODYSSEY - Book 9 & 10 A. THE CICONES: In book 9, Odysseus is sharing his hardship with the King Alcinous, he begins by telling him the story of when he landed in Ismarus, the home of the Cicones. Odysseus explains, how he destroyed the men folk, and shared out the women and the food that he had took from the town, between his comrades. 'And then I said we must escape with all possible speed' Odysseus knows the consequences of his actions and wishes to leave the island, but his crew are enjoying the wine, live-stock and continue to butcher the sheep. Meanwhile the Cicones, go to raise help from the other cicones, who are 'both more numerous and better men, trained in fighting from the chariot and on foot as well, when the occasion requires'. Before Odysseus and his men had left the Cicones had arrived. They fought, but the Cicones gained the upper hand on the Achaean ranks. Six comrades from each ship were killed, the rest including Odysseus got away alive. THE LOFTUS-EATERS: Odysseus then explains the next place he lands, which was home to the Loftus-eaters. Odysseus and his men disembarked, to draw water and eat a quick meal. ...read more.

The first time Odysseus arrives in Aeolia he is welcomed, and looked after for a month. Odysseus tells Aeolus all about his army, troy and where he is going, finally Odysseus asks Aeolus if he would now help him on his way home. Aeolus made arrangements for Odysseus' journey and presented him with a leather bag, in which he had imprisoned the boisterous energies of all the winds. He then called up a breeze to blow Odysseus' ships and crews across the sea. Having not told the crew what was in the bag, they thought it to be riches Odysseus was planning to take home. As Odysseus became in view of his home land, he fell asleep. The crew opened the bag, releasing the winds. When Odysseus awoke he found himself back in Aeolia. On his second arrival to the island, Odysseus took 2 other men back to the palace of Aeolus. When Odysseus arrived, Aeolus was shocked to see him, and cast him out of his palace claiming he would not entertain someone that clearly the Gods detested. THE LAESTRYGONIANS: When Odysseus reaches his next stop, in the land of Laestrygonians, he doesn't land his ship in the same place as his crew's ships. ...read more.

We also see evidence of bad leader ship from Odysseus as he doesn't share what is in the contents of the bag from Aeolus with his crew, making them suspicious and forcing them to open the bag which in turn causes devastation. We also see Odysseus as a charmer to Circe, using his knowledge she is attracted to him to persuade her into letting his men free. C. In book 9 Homer gives us an uncivilised view of the Cyclops in his words 'a fierce, lawless people who never lift a hand to plant or plough, but just leave everything to the immortal gods. Homer throughout the story classes civilised people as 'god-fearing' through Polyphemus' speech Homer, makes it clear that Polyphemus is not civilised 'Stranger, you must be a fool, or must of come from very far a field, to order me to fear or reverence the gods. We Cyclopes care nothing for Zeus with his aegis, nor for the rest of the blessed gods, since we are much stronger than they are. I would never spare you or your men for fear of incurring Zeus, unless I felt like it'. D. Odysseus has to go to the underworld to consult the soul of Teiresias, the blind Theban prophet, there Teiresias will prophesy Odysseus' route, the stages of his journey and how he will reach how across the teeming seas. ...read more.