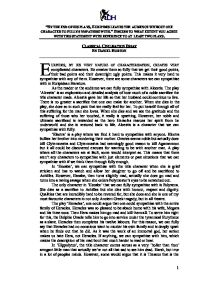 &quot;By the end of his plays, Euripides leaves the audience without one character to fully sympathise with.&quot; Discuss to what extent you agree with this statement with reference to at least two plays.

"BY THE END OF HIS PLAYS, EURIPIDES LEAVES THE AUDIENCE WITHOUT ONE CHARACTER TO FULLY SYMPATHISE WITH." DISCUSS TO WHAT EXTENT YOU AGREE WITH THIS STATEMENT WITH REFERENCE TO AT LEAST TWO PLAYS. CLASSICAL CIVILISATION ESSAY BY DANIEL HORTON E URIPIDES, BY HIS VERY NATURE OF CHARACTERISATION, CREATES VERY complicated characters. He creates them so fully that we get their good points, their bad points and their downright ugly points. This makes it very hard to sympathise with any of them. However, there are some characters we can sympathise with in Euripidean literature. As the reader or the audience we can fully sympathise with Alcestis. The play 'Alcestis' is an exploration and detailed analysis of how much of a noble sacrifice the title character made. Alcestis gave her life so that her husband could continue to live. There is no greater a sacrifice that one can make for another. When she dies in the play, she does so in such pain that we really feel for her. To put herself through all of this suffering for the man she loves. ...read more.

Then Hera makes him go mad and kill them all. To serve him right for this, the Delphic Oracle tells him to go into service under the tyrannical Eurytheus as a slave. Heracles then completes his twelve labours. For this reason, we can fully say that Heracles had no conscious want to murder his own family and is deeply upset when he finds out that he did. As it was the work of an immortal god, her action makes us hate Hera, not Heracles. If anything, we can sympathise with him, which makes the description of his mad bout that much harder to read or hear. In 'Hippolytus', the title character comes across as a very 'holier than thou' arrogant little man that actually we're not all that sad to see him dead. Harsh, but true in a lot of peoples minds. However, some would argue that it is Theseus that is the character that we can fully sympathise with. He acts as any angry and hurt man would when he finds his wife hung holding a note accusing his son as the man who raped her. ...read more.

He only woke up as he forgot to feed the horses and was murdered while doing it. In 'The Children of Heracles', we can fully sympathise with Macaria (known as Maiden in the play) she is the daughter of Heracles, who is now deceased. She is a minor form of Polyxena and dies for the good of others although not much emphasis is based on this fact. As you can see, Euripides did create characters that we can sympathise with and what they all have in common is that they all seem human. They're not just characters in an ancient play, they have qualities that we can relate to. Alcestis and her undying love for her husband, Theseus and his irrational and angry attitude after the death of his wife and Rhesos with his loyalty to friend in need. All of theses characters and those mentioned above, enhance the plays as if there is nothing in a play we can relate to, then we can't feel the emotions that the characters feel making our reading or viewing pleasure less interactive with what the playwright is trying to get across. The basic human emotions, Euripides puts across brilliantly in his plays which make them that much more successful. 1 ...read more.