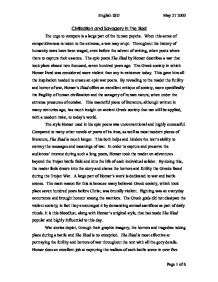 Civilization and Savagery in The Iliad.

Civilization and Savagery in The Iliad The urge to compete is a large part of the human psyche. When this sense of competitiveness is taken to the extreme, a war may erupt. Throughout the history of humanity wars have been waged, even before the advent of writing, when poets where there to capture their essence. The epic poem The Iliad by Homer describes a war that took place almost two thousand, seven hundred years ago. The Greek society in which Homer lived was considered more violent than any in existence today. This gave him all the inspiration needed to create an epic war poem. By revealing to the reader the futility and horror of war, Homer's Iliad offers an excellent critique of society, more specifically the fragility of human civilization and the savagery of human nature, when under the extreme pressures of combat. This masterful piece of literature, although written in many centuries ago, has much insight on ancient Greek society that can still be applied, with a modern twist, to today's world. The style Homer used in his epic poem was unconventional and highly successful. Compared to many other novels or poem of its time, as well as most modern pieces of literature, The Iliad is much longer. This both helps and hinders the text's ability to convey the messages and meanings of war. In order to capture and preserve the audiences' interest during such a long poem, Homer took the reader on adventures beyond the Trojan battle field and into the life of each individual solider. ...read more.

Homer does an excellent job of bringing the reader down to the battle so that the futility of war can be closely felt. The element that ties the violence and waste of war together in The Iliad is the imagery of fire. Almost every battle scene can be related to the wrath, anger and futility by observing these images. From the vary start of the poem Homer sets this tone with the symbol of fire: First he went for the mules and circling dogs but then, launching a piercing shaft at the men themselves, he cut them down in droves- and the corpse-fires burned on, night and day, no end in sight. (pg79, p1) In this instance Homer is commenting on the futility and waste of war by showing us the burning corpses after they have been shot with arrows of plague. He suggests, through this passage and many others, that war is not worth the price the Greeks have paid in lives. Once again, as civilization degenerates the imagery of fire grows stronger to represent the primal urges overtaking the solders. The element of fire is not only sown as the humans battle on the planes of troy but, in book twenty one, the gods of fire and water battle as well. During this battle the imagery of fire is most dominant as two immortal gods futilely fight to their death, killing anything that comes between them. Homer's symbolic imagery of fire helps to guide the reader and forces them to recognize the futility and horror occurring throughout the war. ...read more.

There are also many anti-war activists that promote peace and civilized negotiations versus their b****y counterpart. Charles Rowan Beye tells the best reason why The Iliad remains popular among modern audiences in Homer: In ages that no longer have such bloodshed as part of their daily fare, the poem remains popular because it speaks to the anguished realization of the great nothingness of death that besets the young, by whom nothing yet has been accomplished, and lays to rest the compulsion to perform. (pg8, p2) But many modern war novels still portray horrors that take place during the wars of our century and the savagery of human nature is still in existence. Although Homer and his literature have opened our eyes as to how quickly our civilization can turn to savagery, society must still learn how to control this conversion. If there where any benefits form fighting a war that lasted over nine years, Homer did not speak of them. He did not tell of economic boosts, political gains or technological advancements. There were no tales of friends bonding during the war, or lovers re-united after it. Instead this epic poem bombarded the senses with death, carnage and killing, pausing only briefly to inform the reader of great tragedy and sadness. Throughout the six hundred page epic, Homer never lets the reader forget the horrors of fighting a futile war or the fragility of human 'civilization' and how quickly it can transform into human savagery. As the poem resounds throughout history and modern society, Homer's fiery message of the savagery of war has been delivered. All we must do is listen. ...read more.