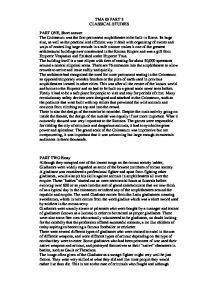 TMA 03 PART 3 CLASSICAL STUDIES PART ONE, Short answer. The Colosseum was the first permanent amphitheatre to be built in Rome. Its huge size, as well as the practical and efficient way it dealt with organising of events and ways of controlling large crowds in a safe manner makes it one of the greatest architectural buildings ever constructed in the Roman Empire and was a gift from Emperor Vespasian and finished under Emperor Titus. The building itself is a vast ellipse with tiers of seating for about 50,000 spectators around a central elliptical arena. There are 76 entrances into the amphitheatre to allow crowds to arrive and leave safely and quickly. The architects had recognised the need for more permanent seating in the Colosseum as opposed temporary wooden benches or the piles of earth used in previous amphitheatres located in other cities. This was after all the centre of the known world and home to the Emperor and so had to be built on a grand scale never seen before. Firstly it had to be a safe place for people to visit and stay for periods of time. ...read more.

There were several different types of gladiators who were trained to excel in the use of different weapons, and wore different types of armour depending on the type of combat they were to enter. Some gladiators who had been prisoners of war used their native weapons and armour, and portrayed themselves as their "native" characters in battles, such as Gauls or Thracians. The image often given of the Gladiator as a savage fighter might very well be just fiction. They were very skilled at what they did and like most people they would rather live than die. This is not so the case of criminals who fought and although given training, were not expected to live beyond a year. A gladiator who survived over three years was on occasion set free. It is now thought that fights may have been more civilised and theatrical than previously believed. The level of training these men undertook suggests that they would have been very good at putting on a show for the paying public and controlling movements, in the same way that the wrestlers of today are basically putting on a show. ...read more.

Because of the way the games were held, it allowed the common people to mix with the upper classes at these events and on occasion win competitions for various luxury items, rather like the 1/2 time "golden ticket" draw held at most sporting events today. The games were not loved by everyone in roman society. As Cicero questions the measure of enjoyment the games can offer in C7 'Pompey's shows', "But what pleasure can it be to a man of refinement when either a powerless man is torn by a powerful beast, or else a magnificent beast is spitted on a hunting spear?" What he is saying is "if you've seen one man kill a beast you've seen it all" and vice versa. The gladiator was looked upon as both a hero and a rogue depending on his route into the games and his ability to wow the crowd with his skills as both a warrior and an actor. In conclusion, the gladiators were important because of what they could offer both the public and the wealthy in respect of status and prestige. The games were also important to Romans because of where they were held and what the amphitheatre conveyed, the very symbol of the politics of Rome. ...read more.