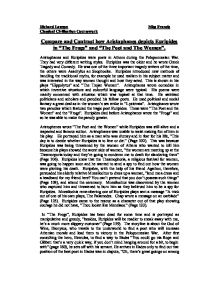 Compare and Contrast how Aristophanes depicts Euripides in &quot;The Frogs&quot; and &quot;The Poet and The Women&quot;.

Richard Lawson Miss Francis Classical Civilisation Coursework Compare and Contrast how Aristophanes depicts Euripides in "The Frogs" and "The Poet and The Women". Aristophanes and Euripides were poets in Athens during the Peloponnesian War. They had very different writing styles. Euripides was the older and he wrote Greek Tragedy and Comedy. He was one of the three important tragedy writers of the time, the others were Aeschylus an Scophocles. Euripides introduced new methods of handling the traditional myths, for example he used realism in his subject matter and was interested in the way women thought and how they acted. This is shown in his plays "Hippolytus" and "The Trojan Women". Aristophanes wrote comedies in which inventive situations and colourful language were typical. His poems were mainly concerned with situation which was topical at that time. He satirized politicians and scholars and parodied his fellow poets. He used political and social fantasy a great deal as in the women's sex strike in "Lysistrata". Aristophanes wrote two parodies which featured the tragic poet Euripides. These were "The Poet and the Women" and the "Frogs". Euripides died before Aristophanes wrote the "Frogs" and so he was able to make the parody greater. Aristophenes wrote "The Poet and the Women" while Euripides was still alive and a respected and famous author. ...read more.

He arrives in Hades only to find out that position of the best poet in Hades was in dispute, "Oh, there's great goings on among the dead these days, great goings on. Civil war, you might call it" (Page 185). Aeschylus the older Athenian poet, who wrote at least 50 years before Aristophanes, was being challenged by Euripides, "Well then along comes Euripides and start showing off to all the fellers we've got down here - cut-throats, highwaymen, murders, burglars, regular rough lot they are", (Page 185) Euripides had the support of the bandits, rogues and the worst men in general while Aeschylus had the sole support of Sophocles, "he's sent a message: with this contest coming on, he says, he'll stand by for third man - if Aeschylus wins he'll just go on as before, but if Euripides wins he'll take him on himself."(Page 186). Sophocles was a friend of Aristophanes. Dionysus decided that even though Euripides had more support, it was Aeschylus chosen to restore Athens to its former glory, "Well in my heart of hearts I have known all the time. No question about it, the man for me is" (Page 210). Euripides in "The Poet and The Woman" is extremely comical especially when he is playing his own tragic heroes as they have heroic qualities which he lacks, other than loyalty which he shows when he tries to rescues Mnesilochus from his Scythian captor. ...read more.

However, in "The Frogs", Aristophanes uses Euripides as a gimmick and exploits his death by replacing Euripides real personality with that of a demagogue whom he hates and blames for the continuing problems that plague Athens. When the social and political situation was stable Aristophanes wrote in a way that reflected this. He made fun of his fellow author Euripides by parodying his characteristics, by emphasising and exaggerating his behaviour to make him comical. When he wrote the "Frogs" he felt he had a point to make. Athens was no longer a carefree society, the political situation was difficult, and the War was going against the Athenian's. Aristophanes wanted to teach the people that they should return to their old values. When he was writing the "Frogs" he no longer wanted to make fun of Euripides but to use him to show the people where they were going wrong. He portrayed Euripides as a manipulative power greedy demagogue who was interested only in himself. He did this as he thought that making Euripides the villain in his comedy would make a greater impression on his audience than by actually stating what he thought in a straight forward way. Aristophanes' aim in using Euripides was to make people think while they were watching and enjoying his plays and to make them understand the necessity of returning to the old values. ...read more.