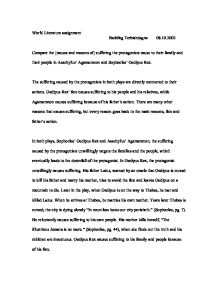 Compare the [causes and reasons of] suffering the protagonists cause to their family and their people in Aeschylus&amp;#146; Agamemnon and Sophocles&amp;#146; Oedipus Rex.

(Sophocles, pg. 38). In Aeschylus' Agamemnon is cursed by the actions his father had done before, "Inherit the curse that descended upon him for his actions." (Alan Weissman, pg. v). After Thystes (Atreus' brother) seduced Atreus' wife he served the boiled flesh of Thystes children at a banquet. Because of these actions, Agamemnon is cursed from the beginning of his life. But Agamemnon didn't try to avoid the fate. He didn't try to find another way to get the winds he needs and he shouldn't have took Cassandra. Also of Agamemnon's own actions that caused suffering it leads to the downfall of him. Hamartia, which means tragic flaw or error in judgment, of Oedipus is another reason for causing suffering. He made some important mistakes and errors that set up the story and eventually causes suffering. First he should have investigated further in Corinth who is father is. He went to the oracle to ask who his father is but came with no answer back. When he was on the to Thebes, he killed Laius. ...read more.

(Sophocles, pg. 16). Oedipus is too proud to accept Tiresias words, instead saying: "An engine-botching crafty cogging knave, Who has no eyes to see with, but for gain, And was born blind in the art!" (Sophocles, pg. 15). He also questions Tiresias power: "When the oracular monster was alive, You said no word to set the people free?" (Sophocles, pg. 15). Oedipus' hubris is another reason for causing suffering. Agamemnon has to some extend hubris. He is too proud to believe the danger he is in when he returns home, instead acting arrogant and ignorant. That will cause the dead of Cassandra and him. Agamemnon should have known better, since his wife hates him because he sacrificed his daughter to the goddess Artemis to get the winds he needs. Sophocles' Oedipus Rex and Aeschylus' Agamemnon have common reasons and causes for the suffering they cause to their family and people. The suffering has different origins, Oedipus Rex causes suffering because of his fate to kill his father and marry his mother and Agamemnon causes suffering because of his father's actions. But there are also many other reasons for causing the suffering, but every cause goes back to the main cause, Oedipus' fate and Agamemnon's father's actions. ...read more.