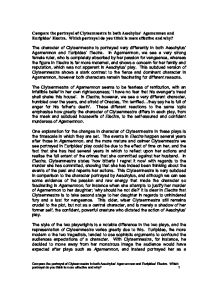 Compare the portrayal of Clytaemnestra in both Aeschylus&amp;#146; Agamemnon and Euripides&amp;#146; Electra. Which portrayal do you think is more effective and why?

Compare the portrayal of Clytaemnestra in both Aeschylus' Agamemnon and Euripides' Electra. Which portrayal do you think is more effective and why? The character of Clytaemnestra is portrayed very differently in both Aeschylus' Agamemnon and Euripides' Electra. In Agamemnon, we see a very strong female ruler, who is completely absorbed by her passion for vengeance, whereas the figure in Electra is far more maternal, and shows a concern for her family and reputation, which was not apparent in Aeschylus' play. This subdued version of Clytaemnestra shows a stark contrast to the fierce and dominant character in Agamemnon, however both characters remain fascinating for different reasons. The Clytaemnestra of Agamemnon seems to be fearless of retribution, with an infallible belief in her own righteousness; 'I have no fear that his avenger's tread shall shake this house'. In Electra, however, we see a very different character, humbled over the years, and afraid of Orestes, 'I'm terrified...they say he is full of anger for his father's death'. These different reactions to the same topic emphasise how greatly the character of Clytaemnestra differs in each play, from the meek and subdued housewife of Electra, to the self-assured and confident murderess of Agamemnon. ...read more.

Euripides on the other hand, tended to be deliberately ambiguous, and his treatment of Clytaemnestra is typical of this. The two sides of the woman that are exposed in this play; the ruthless killer of Agamemnon, as seen through the eyes of Electra, and the reformed wife of Aegisthus, as is later portrayed. This use of sophistic techniques in order to confound the audience's expectations is common in the plays of Euripides, and is particularly effective in this portrayal of such a fascinating woman. The fact that Clytaemnestra is the central character in Agamemnon yet only plays a small part in Euripides' Electra also accounts for several differences in her character. The Clytaemnestra in Agamemnon appears almost constantly throughout the play, and through this we can see the development of her character from the strong wife looking after her husband's estate whilst he is at war: 'Our king and leader absent...our duty pays his due observance to his wife', to the violent mistress who murders her husband without remorse at the end of the play: 'caught by the ruthless falsehood of a wife'. Aeschylus is able to develop his character over a far greater stretch of time than Euripides as, in Electra, Clytaemnestra only appears in one scene. ...read more.

In both plays, Clytaemnestra cites the sacrifice of Iphigeneia as the motive for killing her husband. In Agamemnon, Clytaemnestra laments that 'My own darling, whom my pain brought forth - he killed her'. A similar argument is used in Electra to justify her murder, telling Electra that 'he killed my daughter - why should he not die?'. This is one of the few similarities between the characters, who have otherwise been almost completely altered. The character of Clytaemnestra is almost completely different in the two tragedies, with many different characteristics and motives. Both Euripides and Aeschylus have created an intriguing character in Clytaemnestra. Aeschylus, however, has, in his portrayal of Clytaemnestra, given us a strong femal character, who, in spite of the atrocities she commits, is still capable of evoking the sympathy of an audience, as we see her struggle for acceptance in a male world. It is this strength of character, rather than Euripides' intriguing, yet somewhat weaker Clytaemnestra that is more effective, and it is because of this that she remains the central focus of Agamemnon, and a constantly fascinating individual. ?? ?? ?? ?? Compare the portrayal of Clytaemnestra in both Aeschylus' Agamemnon and Euripides' Electra. Which portrayal do you think is more effective and why? 1 ...read more.