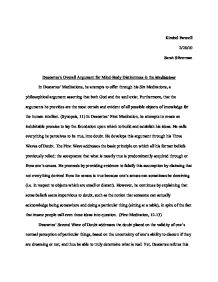 Descartess Overall Argument for Mind-Body Distinctness in the Meditations

Kimbel Farwell 2/26/10 Sarah Silverman Descartes's Overall Argument for Mind-Body Distinctness in the Meditations In Descartes' Meditations, he attempts to offer through his Six Meditations, a philosophical argument asserting that both God and the soul exist. Furthermore, that the arguments he provides are the most certain and evident of all possible objects of knowledge for the human intellect. (Synopsis, 11) In Descartes' First Meditation, he attempts to create an indubitable premise to lay the foundation upon which to build and establish his ideas. He calls everything he perceives to be true, into doubt. He develops this argument through his Three Waves of Doubt. The First Wave addresses the basic principle on which all his former beliefs previously relied: the acceptance that what is mostly true is predominantly acquired through or from one's senses. He proceeds by providing evidence to falsify this assumption by claiming that not everything derived from the senses is true because one's senses can sometimes be deceiving (i.e. in respect to objects which are small or distant). However, he continues by explaining that some beliefs seem impervious to doubt, such as the notion that someone can actually acknowledge being somewhere and doing a particular thing (sitting at a table), in spite of the fact that insane people call even these ideas into question. (First Meditation, 12-13) Descartes' Second Wave of Doubt addresses the doubt placed on the validity of one's normal perception of particular things, based on ...read more.

Descartes introduces the wax example in order to exemplify that when judging the body, just as in the case of the wax, our judgments are based on the nature of the wax, which are susceptible to being mislead. This is because the wax, and or body, can change its form in numerous ways. Furthermore, common characteristics usually associated with the perception of the properties of a certain substance, such as wax (i.e. its unique shape, color, texture, and scent), are in fact actually subject to change. This is demonstrated in the case of wax, in that it loses all those characteristics when it is introduced to heat. Descartes concludes that in order to conceive of the true nature of wax, it is necessary to take away everything which does not belong to the inherent makeup of the wax, which would leave something that is merely extended, flexible, and changeable in more ways than one can ever imagine. Hence, the perception and nature of the wax is by no means dependent on one's imagination, touch, or vision, but based off one's pure mental scrutiny perceived by the mind alone. Yet, even though one claims to see the wax, according to Descartes they are only judging the substance to be wax based solely on the faculty of judgment, which exists only in the mind. ...read more.

Descartes explains that because he can clearly and distinctly perceive the facts of arithmetic and geometry, the ideas of these natures must then be innate. Therefore, even though he could have acquired the ideas from his senses, the facts, which he can prove about them to be certain, justify the rejection of any remaining doubts. Descartes then reaffirms God's existence again with the Ontological Argument (an a priori proof based on the concept that God is a being in which no greater is possible and so must exist) (Fifth Meditation, 44-49) Lastly, the Sixth Meditation attempts to prove that the existence of material things, and the real distinction between mind and body. First, Descartes distinguishes the intellect from the imagination, and that the mind is really distinct from the body in so far as it is simply a thinking non-extended thing. Even though the mind is distinct from the body, Descartes asserts that the mind is so closely joined to the body that they in effect create a unit. This is because even though the "I"/mind can be distinctly understood without faculties of certain special modes of thinking (imagination and sensory perception), one cannot understand these faculties independent of the mind. Thus, the difference is based on the disparities between the modes of a thing and the thing itself. Descartes then justifies how to avoid all the errors, which can come from the senses, and bases the justification for the existence of material things on God's role as guarantor that all cognitive faculties are fundamentally accurate. (Sixth Meditation, 50-62) ...read more.