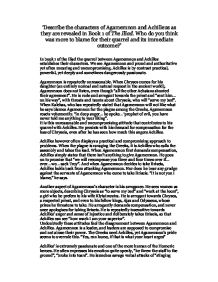 'Describe the characters of Agamemnon and Achilleus as they are revealed in Book 1 of The Iliad. Who do you think was more to blame for their quarrel and its immediate outcome?'

'Describe the characters of Agamemnon and Achilleus as they are revealed in Book 1 of The Iliad. Who do you think was more to blame for their quarrel and its immediate outcome?' In book 1 of the Iliad the quarrel between Agamemnon and Achilles establishes their characters. We see Agamemnon and proud and authoritative yet often uncaring and uncompromising. Achilles is by contrast practical, powerful, yet deeply and sometimes dangerously passionate. Agamemnon is repeatedly unreasonable. When Chryses comes for his daughter (an entirely normal and natural request in the ancient world), Agamemnon does not listen, even though "all the other Achaians shouted their agreement". He is rude and arrogant towards the priest and "sent him... on his way", with threats and taunts about Chryseis, who will "serve my bed". When Kalchas, who has repeatedly stated that Agamemnon will not like what he says blames Agamemnon for the plague among the Greeks, Agamemnon reacts vehemently. ...read more.

"It is not you I blame," he says. Another aspect of Agamemnon's character is his arrogance. He sees women as mere objects, describing Chryseis as "to serve my bed" and "work at the loom", a girl who he prefers to his wife Klytaimestra. He is arrogant towards Chryses, a respected priest, and even to his fellow kings, Ajax and Odysseus, whose prizes he threatens to take. He arrogantly demands compensation, and never once apologises for taking Briseis. He is repeatedly insensitive towards Achilles' anger and sense of injustice and deliberately takes Briseis, so that Achilles can see "how much I am your superior". Undoubtedly these attitudes fuel the disagreement between Agamemnon and Achilles. Agamemnon is a leader, and leaders are supposed to compromise and not abuse their power. The Greeks need Achilles, yet Agamemnon's pride seems to overrule this. ...read more.

Yet the men respond quite differently to Nestor's words. Agamemnon makes yet more savage accusations against Achilles claiming that he wants to "rule all, to dictate all" - when all he has wanted so far is to keep possession of what is his. Achilles however responds quite reasonably. He backs down and decides "not to come to hand-fighting over the girl", accepting that "you Achaians gave her, and you shall take her away" - which is exactly what wise Nestor had asked him to do - not to "seek open quarrel with the king". Agamemnon must therefore be more to blame for the quarrel. He is leader of the Greeks. It is his duty to compromise and unify the Greeks. He never offers Achilles any form of compensation for the loss of Briseis. He ignores the wishes of his fellow Greeks and the wisdom of Nestor. Achilles may be impulsive sometimes, but it is the duty of a leader to control that impulsiveness. ...read more.