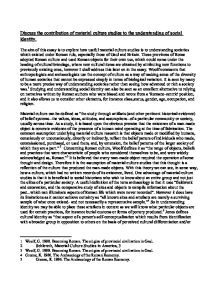 Discuss the contribution of material culture studies to the understanding of social identity.

Discuss the contribution of material culture studies to the understanding of social identity. The aim of this essay is to explore how useful material culture studies is to understanding societies which existed under Roman rule, especially those of Gaul and Britain. These provinces of Rome adopted Roman culture and used Roman objects for their own use, which could come under the heading of cultural bricolage, where new cultural items are obtained by attributing new functions to previously existing ones, however I shall address this later on in the essay. Woolf comments that anthropologists and archaeologists use the concept of culture as a way of making sense of the diversity of human societies that cannot be expressed simply in terms of biological variation. It is seen by many to be a more precise way of understanding societies rather than seeing how advanced or rich a society was.1 Studying and understanding social identity can also be seen as an excellent alternative to relying on narratives written by Roman authors who were biased and wrote from a 'Romano-centric' position, and it also allows us to consider other elements, for instance class,status, gender, age, occupation, and religion. Material culture can be defined as "the study through artifacts (and other pertinent historical evidence) of belief systems--the values, ideas, attitudes, and assumptions--of a particular community or society, usually across time. As a study, it is based upon the obvious premise that the existence of a man-made object is concrete evidence of the presence of a human mind operating at the time of fabrication. ...read more.

Also Pitts comments that it was common for amphorae, drinking vessels and metal drinking utensils, usually imported goods, to be found in the tombs. This perhaps hints at the importance of drinking held by the society9. One very good example of how cultures embraced and utilised Roman culture in funerary rituals is to be found in Woolf's 'Becoming Roman' where the Lingon wanted his altar beside his tomb to be made of marble from Luni in Italy, which is meant to be the best quality stone, Woolf comments that it is significant that the Lingon knew precisely where the best marble was to be found as it shows that he has become more culturally aware of the quality materials the Roman world has to offer. Pottery is considered to be the least biased class of material culture, as Pitts states that it has the ability to "provide a bottom-up perspective of consumption practice at virtually all levels of society".10 This is important as issues have been raised about trusting evidence which belonged to the elite class as it will not give a viewpoint from a sub-elite class' perspective, and so it is considered to be biased towards the elites. What pottery can offer us is an insight into a particular society's consumption habits, for example we can see that by the number of amphorae and drinking vessels, found in sites in Britain, that drinking and feasting were major customs before Romans invaded, but studies had shown that the production of this pottery is reduced ...read more.