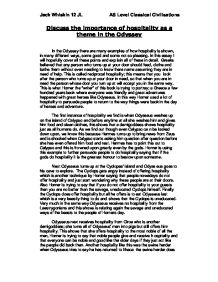 Discuss the importance of hospitality as a theme in the Odyssey

Discuss the importance of hospitality as a theme in the Odyssey In the Odyssey there are many examples of how hospitality is shown, in many different ways, some good and some not so pleasing. In this essay I will hopefully cover all these points and explain all of these in detail. Greeks believed that any person who turns up at your door should feed, clothe and bathe them without even needing to know there name assuming they are in need of help. This is called reciprocal hospitality; this means that you look after the person who turns up at your door in need, so that when you are in need the person whose door you turn up at will accept you in the same way. This is what Homer the "writer" of this book is trying to portray; a Greece a few hundred years back where everyone was friendly and great adventures happened with great heroes like Odysseus. ...read more.

Next Odysseus turns up at the Cyclopes' island and Odysseus goes to his cave to explore. The Cyclops gets angry instead of offering hospitality which is another technique by Homer saying that people nowadays do not offer hospitality and just start wondering why these people are at their doors. Also Homer is trying to say that if you do not offer hospitality to your guests then you are no better than the savage, uneducated Cyclops himself. Finally the Cyclops does offer hospitality but all he offers is to eat Odysseus last which is a very beastly thing to do and shows that the Cyclops is uneducated. Very much in the same way Odysseus receives no hospitality from the Laestrygonians and this shows is relating again the savage and uneducated ways of the beasts to the people of Homers day. Odysseus next receives hospitality from Circe who is another demigoddess; she turns all of Odysseus' men into pigs but still offers him hospitality. ...read more.

In hospitality you are only supposed to feed and clothe and bathe your guest but the Phaeacians take this a stage further by taking him back to his homeland and sending him away with more gold than he left Troy with. This shows that if you make a name for yourself that adventures can be there own reward with hospitality. A good example of hospitality is before he even knew Odysseus' name he said to Odysseus that he should not sit on the floor but on a throne and told the maids to bring him his finest clothes for the man. Hospitality is a major theme throughout the book as Homer is trying to persuade people to return to the adventure days with heroes. The theme of hospitality is explored throughout this book as everywhere Odysseus goes he receives hospitality, be it good hospitality or bad hospitality. Showing that hospitality is a big part of a Greeks everyday life and that nit is very important. ?? ?? ?? ?? Jack Whiskin 12 JL AS Level Classical Civilisations ...read more.