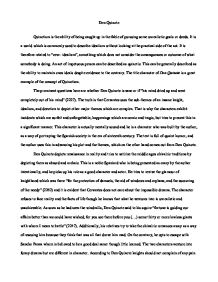 Don Quixote Quixotism is the ability of being caught up in the fable of pursuing some unrealistic goals or deeds. It is a world which is commonly used to describe idealism without looking at the practical side of the act. It is therefore related to "over- idealism", something which does not consider the consequences or outcome of what somebody is doing. An act of impetuous person can be described as quixotic. This can be generally described as the ability to maintain ones ideals despite evidence to the contrary. The title character of Don Quixote is a great example of the concept of Quixotism. The prominent questions here are whether Don Quixote is sane or if "his mind dried up and went completely out of his mind" (2227). The truth is that Cervantes uses the sub-themes of an insane knight, idealism, and devotion to depict other major themes which are complex. That is why the characters exhibit incidents which are surfeit and unforgettable, happenings which are comic and tragic, but tries to present this in a significant manner. ...read more.

As soon as he had seen the windmills, Don Quixote said to his squire "fortune is guiding our affairs better than we could have wished; for you see there before you (...) some thirty or more lawless giants with whom I mean to battle" (2247). Additionally, his relatives try to take the chivalric romances away as a way of rescuing him because they think that was all that drove him mad. On the contrary, he opts to escape with Sancho Panza whom is believed to be a good deal saner though little learned. The two characters venture into funny dreams but are different in character. According to Don Quixote knights should not complain of any pain because they are meant to bear wounds even when "their bowels may be dropping out" (2249). On the other hand, Sancho belives that he has to complain about any minor pain as God knows it, "unless the same rule applies to squires as well" (2249). For Don Quixote life is like a theater and everyone is playing a part in it. ...read more.

knight- errantry to be an "righter of wrongs, avenger of injustices, protector of damsels, terror of giants, and champion of battles" (2293). He wants to remain firm on his ideas and believes despite the facts from the parallel side which he knows well. From his quote "I know who I am, and who I may be, if I choose" (2244), he explains the fact that he is very sane and he knows what he is doing. His insanity is known to him and very intentional just like the character Hamlet in Shakespeare's work. The author was being creative and exploring on the themes of idealism, which is best seen from Don Quixote character who is a "flower of chivalry" (2296). He is therefore being quixotic, and Cervantes asks us: do we consider the practicality of the goals we venture into? It is a good text with lessons on the pursuit of unrealistic goals in life. We should not have condescending attitudes towards nonconformists or judge other people, because one man's genius is another man's insanity, just as one man's giant is another man's windmill. ...read more.