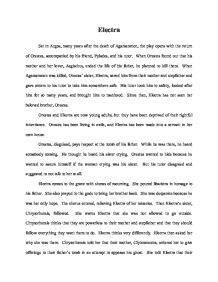 Electra - Set in Argos, many years after the death of Agamemnon.

Electra Set in Argos, many years after the death of Agamemnon, the play opens with the return of Orestes, accompanied by his friend, Pylades, and his tutor. When Orestes found out that his mother and her lover, Aegisthus, ended the life of his father, he planned to kill them. When Agamemnon was killed, Orestes' sister, Electra, saved him from their mother and stepfather and gave orders to his tutor to take him somewhere safe. His tutor took him to safety, looked after him for so many years, and brought him to manhood. Since then, Electra has not seen her beloved brother, Orestes. Orestes and Electra are now young adults, but they have been deprived of their rightful inheritance. Orestes has been living in exile, and Electra has been made into a servant in her own house. ...read more.

She welcomes them. She then sends for Aegisthus so that he can hear the important news. When Electra heard about the news, she was devastated. When Orestes knew that his sister was mourning his death, he revealed himself to her and told her the whole truth. She was in high spirits. He then told her his plan of killing their mother. Electra agreed. All they had to do now is wait for an opportune moment to slay her. When Clytemnestra was alone, Orestes took advantage and killed his mother. When Aegisthus returns, he was shocked not only because Orestes was back at Argos and alive but also because his wife was killed by her own son. He then got scared of Orestes. Then he told Aegisthus that it was his turn to die. Orestes then led him to the palace. When they were inside, Aegisthus screamed. The Chorus rejoiced. ...read more.