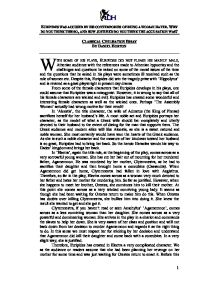 EURIPIDES WAS ACCUSED BY HIS CONTEMPORIES OF BEING A WOMAN HATER. WHY DO YOU THINK THIS SO, AND HOW JUSTIFIED DO YOU THINK THE ACCUSATION WAS? CLASSICAL CIVILISATION ESSAY BY DANIEL HORTON W ITH SOME OF HIS PLAYS, EURIPIDES DID NOT PLEASE HIS MAINLY MALE, Athenian audience with the references made to Athenian hypocrisy and the challenges and questions he raised on some of the moral issues of the time and the questions that he asked in his plays were sometimes ill received such as the role of women etc. Despite this, Euripides did win the tragedy prize with 'Hippolytus' and is revered as a great playwright in present day drama. From some of the female characters that Euripides develops in his plays, one could assume that Euripides was a misogynist. However, it is wrong to say that all of his female characters are wicked and evil; Euripides has created some wonderful and interesting female characters as well as the wicked ones. Perhaps 'The Assembly Women' actually had wrong motive for their revolt! In 'Alcestis', the title character, the wife of Admetus (the King of Pherae) sacrifices herself for her husband's life. A most noble act and Euripides portrays her character, as the model of what a Greek wife should be: completely and utterly devoted to their husband to the extent of dieing for the man that supports them. ...read more.

This then lead him to go to the Delphic Oracle that told him to be a slave to Eurytheus thus leading to his infamous twelve labours. Anyhow, Megara, at the beginning of the play, thinks that she is a widow and is a vulnerable woman who has to be strong for her three young sons. However, Heracles actually is not dead and comes home to them in Thebes. He is then turned mad by Hera and shoots two of his sons with arrows in his madness. Megara takes the last son and locks herself in room but Heracles breaks in and shoots them both with one arrow. Magara's sudden bout of courage during her husband's madness shows how this vulnerable woman could be a strong hearted, quick thinking and clever woman with her sons' interests and lives at heart. Another play with memorable female characters is 'Hippolytus'. The two main female characters in this play are Phaedra, Hippolytus' stepmother, and her Nurse. It is strange to see that a servant is given quite a meaty role, as it is usually those persons of note and most importantly, wealth. However, Euripides creates a conniving personality on the nurse who disguises her genius by pretending to be simple. The nurse tells Hippolytus of her mistress' unorthodox love for him. Of course, Phaedra's feelings of love aren't natural; they've been created by the goddess Aphrodite whom Hippolytus has shunned due to his committed vow of chastity and his adoration towards the goddess Artemis. ...read more.