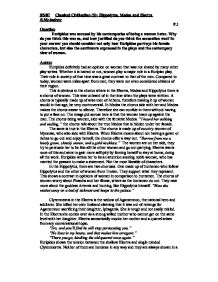 Question Euripides was accused by his contempories of being a woman hater. Why do you think this was so, and how justified do you think the accusation was? In your answer you should consider not only how Euripides portrays his female characters, but also the sentiments expressed in the plays and the contempory view of women. Answer Euripides definitely had an opinion on woman that was not shared by many other play writes. Whether it is hatred or not, women play a major role in a Euripian play. Their role in society of that time was a great contrast to that of the men. Compared to today, women were miles apart from men; they were not even considered citizens of their region. This is obvious in the chorus where in the Electra, Medea and Hippolytus there is a chorus of women. This was unheard of in the time when the plays were written. A chorus is typically made up of wise men of Athens, therefore making it up of women would in that age, be very controversial. In Medea the chorus side with her and Medea makes the chorus swear to silence. Therefore she can confide in them without having to put a face on. ...read more.

This is not brought to the surface in Euripides' play therefore she appears as a pathetic little girl, craving attention. Euripides shows that women dominate this play and fails to reflect upon the true reason why the female roles are characterised the way they are. Therefore the accusation of being a woman hater is valid. In the Medea, the Nurse shows sympathy to Medea by siding with her. The play opens with an apprehensive speech by the Nurse. One of sympathy, but betrayal done to Medea. She worries as to what Medea might do to herself. "But now her world has turned to enmity, and wounds her where her affection's deepest." The Nurse is a figure for Medea to confide in. She potters about concerned about her mistress whilst fearing her. "I am afraid some dreadful purpose is forming in her mind. She is a frightening woman." Medea shows no remorse over her actions. She is manipulative and cunning with Jason and Aegeus. She tries to make Jason feel guilty of his actions, but his misogynist face repels her whining now he is immune to it. "Where now can I turn? Back to my country and my father's house, which I betrayed to come with you?" ...read more.

The Nurse thinks she is doing the right thing to help her mistress, but infact she causes more trouble. She tells Hippolytus the secret but only if he swears to keep it a secret. "My boy, the oath you gave me, you'll never break that?" The Nurse whines to Hippolytus hoping to get her own way. "Oh, I clasp your knees and beg you," The Nurse's stubbornness to try and please ends up leading to Phaedra dying without honour. Euripides begins his plays often with erratic women, ie Electra, Medea and Phaedra. They have serious issues and seek vengeance, with the exception of Phaedra who is the cause of a vengeful attack; Theseus killing his son, Hippolytus. There are never any heroic women or women that we feel sympathy for. The only woman who is in the slightest way victimised is Clytemnestra. Electra murders her in revenge for killing her father Agamemnon. This is made obvious in the play and Clytemnestra's bad relationship with her daughter Electra does not show her in a good light. We feel sympathy for the self-inflicted widow, when she describes what she has gone through. "Then her father cut her soft white throat-My Iphigenia." Out of all of Euripides' female characters, she contains the most sentiment and emotion. In summary, apart from Clytemnestra, the lady characters are mad psychopathic women, with hidden depths, morals and loyalties. 1678 Words. 3/2/03 Classical Civilisation (S): Hippolytus, Medea and Electra B.McAndrew P.3 ...read more.