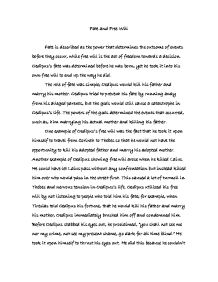 Fate and free will.

Fate and Free Will Fate is described as the power that determines the outcome of events before they occur, while free will is the act of freedom towards a decision. Oedipus's fate was determined before he was born, yet he took it into his own free will to end up the way he did. The role of fate was simple; Oedipus would kill his father and marry his mother. Oedipus tried to prevent his fate by running away from his alleged parents, but the gods would still cause a catastrophe in Oedipus's life. The powers of the gods determined the events that occurred, such as, him marrying his actual mother and killing his father. ...read more.

This caused a lot of turmoil in Thebes and nervous tension in Oedipus's life. Oedipus utilized his free will by not listening to people who told him his fate; for example, when Tiresias told Oedipus his fortune, that he would kill his father and marry his mother, Oedipus immediately brushed him off and condemned him. Before Oedipus stabbed his eyes out, he proclaimed, "you shall not see me nor my crime, not see my present shame, go dark for all time blind." He took it upon himself to thrust his eyes out. He did this because he couldn't bare the shame of his life and he did not want to see what his life would transpire to be. ...read more.

During his reign he did not try to prevent his downfall. If he wanted to prevent his ruin he could have found out the truth secretly or he could have taken it upon himself to look for Laius's killer or he could have kept the news to himself and no one would have ever known. In conclusion, fate and free will took place in the play. The gods knew what would happen to Oedipus and however Oedipus determined him self is how it would occur. It leads to wonder if our lives are head by free will or fate or if they go hand and hand. ...read more.