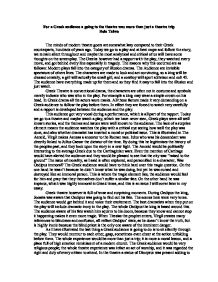 For a Greek audience a going to the theatre was more than just a theatre trip.

For a Greek audience a going to the theatre was more than just a theatre trip Bola Taiwo The minds of modern theatre goers are somewhat lazy compared to their Greek counterparts, hundreds of years ago. Today we go to a play and at best mope and follow the story, we remain silent throughout and maybe the most analytical and critical of us will have some thoughts on the screenplay. The Greeks however had a rapport with the play, they watched every move, and got behind every line especially in tragedy. The reasons why this occurred are as follows: Modern plays fall into the category of illusion dramas. The Audience are invisible spectators of others lives. The characters are made to look and act convincing, so a king will be dressed ornately, a girl will actually be small girl, and a cowboy will sport a Stetson and colt 45. The audience have everything made up for them and so they find it easy to fall into the illusion and just watch. ...read more.

By doing this he legitimises the history of the peoples past, and they look upon the story in a new light. The Aeneid would be politically interesting to the average Greek due to the Carthaginian wars. Even the mention of Carthage would have alerted the audience and they would be pleased to see that the city was "raised to the ground" The issue of morality, as I said is often explored, and personified in a character, Was Oedipus immoral? The Greek audience would have to think hard over this tragic question. On the one hand he wasn't because he didn't know what he was doing, but yet he was cursed and destroyed like an immoral person. This is where the tragic element lies, the audience would feel for him and pray that they themselves don't suffer a similar fate. On the other hand he was impious, which was highly immoral in Greek times, and this is an issue I will cover later in my essay. Greek theatre however is full of tense and surprising moments. ...read more.

In the theatre a statue of Dionysus was present adding to the religious undertone. Having establishes the religious importance of the theatre; it is understandable how the audience have issues of morality and respect to the Gods on their minds. When Oedipus is impious, this is considered highly immoral as he had full control over his actions unlike his other actions. Everyone was expected to attend the theatre, and even those who couldn't afford it were paid for by the state. One can only imagine but the atmosphere was full of people from all walks of life. It is said there were around 14000 people in the oval shaped arena sat all round, this is almost like a modern day football match. The huge social importance of the theatre can be seen and understood from this, people went there to share ideas with friends, see friends, and meet people. I can imagine that because of all these factors and variety of people, the theatre was a very interesting place. People would obviously have different motives for going but it is established that it was more than just entertainment. ...read more.