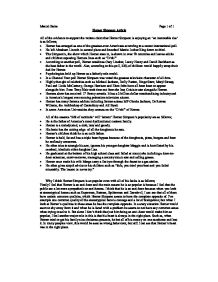 Maniel Bains Page 1 of 1 Homer Simpson Article All of the evidence to support the writers claim that Homer Simpson is enjoying an 'an inexorable rise' is as follows; * Homer has emerged as one of the greatest-ever Americans according to a recent international poll. * He left Abraham Lincoln in second place and knocked Martin Luther King down to third. * The Simpson's, the show which Homer stars in, is shown in over 70 countries and leaves adults and children repeating Homers lines such as "D'oh!" * According to another poll, Homer outshines Gary Lineker, Lenny Henry and David Beckham as the best father in the world. Also, according to this poll, 22% of children would happily swap their dad for Homer. ...read more.

of Homer. All of the reasons 'folk of rectitude' will 'lament' Homer Simpson's popularity are as follows; * He is the father of America's most dysfunctional cartoon family. * Homer is a maladjusted, a slob, lazy and greedy. * His brain has the cutting edge of all the doughnuts he eats. * Homer's children think he is an unfit father. * Homer is bald, fat and has a triple heart bypass because of the doughnuts, pizza, burgers and beer he endlessly consumes. * He often tries to strangle his son, ignores his younger daughter Maggie and is humiliated by his cerebral, idealistic older daughter Lisa. * He graduated at the bottom of his high school class and failed at many jobs including a door-to-door salesman, snow-remover, managing a country music star and selling grease. ...read more.

For example one common quality of the stereotypical hero is courage and a lot of brainpower, but when I look at Homer's qualities in these areas he has the complete opposite. In a scary situation Homer would seem to shy away from it and when he is faced with a problem he seems to not have any common sense when trying to solve it. But alone I don't think that just him being an anti-hero would make him so popular, I feel another major role in this is that his heart is always in the right place. Such as, when Homer tried to get his family nice christmas presents, he bet all of his money on one racehorse and lost it. In many peoples view, this would be seen as wrong behaviour, but still I can see that Homer's heart was in the right place. ...read more.