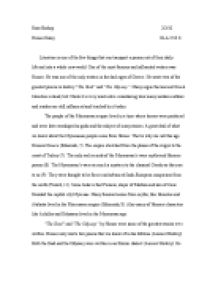 Homers influence has inspired many authors and changed daily life for ancient and modern people.

﻿Rose Bishop 2/2/10 Homer Essay ELA 3 SS 8 Literature is one of the few things that can transport a person out of their daily life and into a whole new world. One of the most famous and influential writers was Homer. He was one of the only writers in the dark ages of Greece. He wrote two of the greatest poems in history ?The Iliad? and ?The Odyssey?. Many argue that ancient Greek literature is dead, but I think it is very much alive considering how many modern authors and readers are still influenced and touched by it today. The people of the Mycenaean empire lived in a time where heroes were produced and were later worshiped as gods and the subject of many stories. A great deal of what we know about the Mycenaean people came from Homer. That is why we call this age Homers Greece (Edmonds, 7). The empire stretched from the plains of the Argos to the coast of Turkey (7). The only real records of the Mycenaean?s were myths and Homers poems (8). The Mycenaean?s were as much a mystery to the classical Greeks as they are to us (9). ...read more.

?The Odyssey? is a template for many modern adventure stories (World Book M-O, 675) Homer was one of the most accomplished writers and inspired many epic poems to come. An epic poem is a long poem that narrates the heroic exploits of an individual in ways relating to the current beliefs of his or her society (Epic Poetry). Usually the hero of the story would do super human things (Epic Poetry). Homer wrote epic poems. They were often a mix of myths and history (Edmonds, 18). Homer was a bard, a poet who sang or spoke his poetry. Homer was one of the only bards who wrote his work down. He was heavily influenced by early oral poetry (Chismol, 113). It is also said that he was influenced by Calliope, the muse of epic poems, and was often depicted by artists with a tablet, the sign of Calliope (Epic poetry). Little is known about Homer and much is still a mystery. He lived sometime in between the seventh and eighth century B.C, but it is mysterious how uncanny his details in ?The Iliad? and ?The Odyssey? were about the Mycenaean?s considering their civilization collapsed 200 years before he was born (The Homeric Question). ...read more.

Homer?s influence has inspired many authors and changed daily life for ancient and modern people. Plato, a famous philosopher said that Homer was ?The educator of Greece? (Ancient History). Homer influenced many Roman poets like Virgil and Ovid (Lombardi). He also inspired Greek playwrights like Aeschylus, Euripides, and Sophocles (World Book H, 304). ?The Iliad? and ?The Odyssey? are almost like the bible to ancient Greeks and Romans (Lombardi). Hero cults that sprung up during the Hellenistic age worshiped Homer as if he were a god (Homer). The major curriculum in many Greek schools was ?The Iliad? and ?The Odyssey? (World Book H, 304). Today a main part of our English curriculum is about Homer. Homer influenced many authors. Shakespeare, John Keats, and Walt Whitman were some of the many who were inspired by Homer (Lombardi). James Joyce wrote ?Ulysses?, which was based on ?The Odyssey?. It was the greatest epic of the 20th century (Lombardi). Also various movies have been made of ?The Iliad? and ?The Odyssey?. Today Homers impact can be seen everywhere, in books, movies, and school. His works of art are thriving in modern society. Without Homer western literature would not be the same. Ancient Greece might be long gone but its legacy lives on. ...read more.