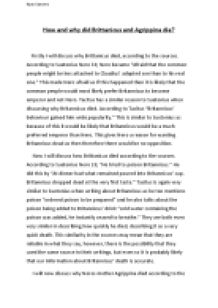 How and why did Britannicus and Agrippina die?

﻿Ryan Sanders How and why did Brittanicus and Agrippina die? Firstly I will discuss why Brittanicus died, according to the sources. According to Suetonius Nero 33; Nero became ?Afraid that the common people might be less attached to Claudius? adopted son than to his real one.? This made Nero afraid as if this happened then it is likely that the common people would most likely prefer Britannicus to become emperor and not Nero. Tacitus has a similar reason to Suetonius when discussing why Britannicus died. According to Tacitus ?Britannicus? behaviour gained him wide popularity.? This is similar to Suetonius as because of this it would be likely that Britannicus would be a much preferred emperor than Nero. ...read more.

Britannicus? drink ?cold water containing the poison was added, he instantly ceased to breathe.? They are both even very similar in describing how quickly he died, describing it as a very quick death. This similarity in the sources may mean that they are reliable in what they say, however, there is the possibility that they used the same source in their writings, but even so it is probably likely that our information about Britannicus? death is accurate. I will now discuss why Neros mother Agrippina died according to the sources. According to Suetonius Nero 34; Nero felt very threatened by her. ?Her threats and violent behaviour terrified him into deciding that she must die.? This is referring to her change of allegiance from her own son Nero, to Claudius? son Brittanicus. ...read more.

The fact that both sources say similar things mean it?s likely that their information is reliable. When discussing how Agrippina dies it is clear that it was Nero that caused her death. Both Suetonius and Tacitus say that ?He tried to poison her? but each time she had already taken an antidote. Suetonius says that ?He rigged up a machine in the ceiling of her bedroom, which would dislodge the panels and drop them on her whilst she slept.? This may have happened but Tacitus does not mention this scheme so whether it did happen or not is unclear. After the failed plots to kill his mother Agrippina, both Suetonius and Tacitus explained how he finally killed her very similarly. ?Made it seem as if she sent Agerinus to assassinate him but committed suicide.? ...read more.