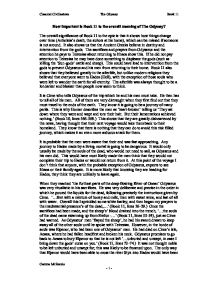 How important is Book 11 to the overall meaning of The Odyssey?

How important is Book 11 to the overall meaning of The Odyssey? The overall significance of Book 11 to the epic is that it shows how things change over time (Anticleia's death, the suitors at his home), which can be missed if someone is not around. It also shows us that the Ancient Greeks believe in destiny and intervention from the gods. The sacrifices and prayers from Odysseus and the attention he pays to Teiresias about returning to Ithaca show this. If he did not pay attention to Teiresias he may have done something to displease the gods (such as killing the 'Sun-gods' cattle and sheep). This could have lead to intervention from the gods to prevent Odysseus and his men from returning to their home. Book 11 also shows that they believed greatly in the afterlife, but unlike modern religions they believed that everyone went to Hades (h**l), with the exception of those souls who were left to wander the earth for all eternity. The afterlife was always thought to be a lot darker and bleaker than people now seem to think. It is Circe who tells Odysseus of the trip which he and his men must take. He then has to tell all of his men. All of them are very distraught when they first find out that they must travel to the ends of the earth. They know it is going to be a journey of many perils. This is why Homer describes the men as 'heart-broken' telling us 'They sat down where they were and wept and tore their hair. But their lamentations achieved nothing.' (Book 10, lines 566-568.) This shows that they are greatly disheartened by the news, having thought that their next voyage would take them back to their homeland. They know that there is nothing that they can do to avoid this risk filled journey, which makes it an even more arduous a task for them. ...read more.

They have also been known not to listen when Odysseus had suggested it was safer to leave places. With Teiresias it is to let him know how to get home, and to acknowledge Poseidon's wrath, and Anticleia is to let us know all that he has missed over the long years, which we can now see have been painful for his family as well as for Odysseus. The significance of Odysseus' meetings with the shadows of the women is a reminder to us of the various women who have influenced his life and the lives of others in the poem. The women who they are similar to, in various different ways, have all had some relation to Odysseus and the situations that we find him in in the epic. Like Odysseus, Antiope was a wanderer. After becoming pregnant to Zeus (who was in the guise of a satyr when he made love to her), she fled her home in Thebes, and found herself in Sicyon. Here she married King Epopeus, and it is thought that she may have been kidnapped by him (as Helen was by Paris). Subsequently her husband killed her father after he went to save her. To take revenge for his brother's death, Antiope's uncle, Lycus, then came for her. With her husband himself dead, the new king gave Antiope back to her family and she returned to Thebes. On her return she was imprisoned and abused by her aunt, Dirce. (Odysseus was imprisoned on Calypso's island, and had no means of escape until she gave him tools to build a raft, though this all happens after leaving Hades.) A similar character to Clytemnestra, Eriphyle sends her husband, Amphiara�s, with the seven against Thebes, which she knew was a journey from which he would never return. She was also later persuaded to send her sons, Alcmeon and Amphilochus on the dangerous journey of Epigoni against Thebes, but on his return (as Clytemnestra's children took vengeance on her), Alcmeon killed his mother. ...read more.

(Lines 349-351.) Odysseus, 'the master-schemer', tells Alcinous 'I would be happy if you pressed me to stay among you even for a year, as long as you saw me safely back and loaded me with splendid gifts.' (Lines 355-357.) To me this is saying 'I'm quite happy here among your people, being given many gifts, and I would stay longer.' This is not just down to greed, but would also be a sign of Alcinous' status when Odysseus got home and told everyone how generous he was. This would bring even greater respect and the possibility of more trade for him. Alcinous takes these words as Odysseus mistakenly thinking that they believe him a fake 'we are far from regarding you as one of those impostors and cheats whom this dark world brings forth in such profusion to spin their lying yarns which nobody can test.' (Lines, 364-366.) This too is a possibility, as Odysseus has no proof of what he is saying, and that could be another reason he has offered to stay up to a year. Alcinous then asks Odysseus to continue, as he has 'the artistry of a bard.' (Line 369.), asking more of his friends, their expedition to Ilium and their deaths, saying 'We have endless time ahead of us tonight, it's early for us to go to our beds.' (Lines 373-374.) Odysseus agrees to continue the tale, but does imply he is tired, saying that there is also time for sleep. I think that Homer sees humankind as chess pieces, which the gods or destiny are playing with. From the prophecies made, and what we know to happen after them, it seems that occurrences in the poem have been pre-destined. I think in The Odyssey Homer sees humans as insignificant overall. The have little influence over their lives; the gods decide what will happen with them. The lives of mortals seem to be a game for the gods, where they all want their character to win. Athene wants Odysseus to win, but Poseidon does not. Classical Civilisations The Odyssey Book 11 Gemma McKenzie - 5 - ...read more.